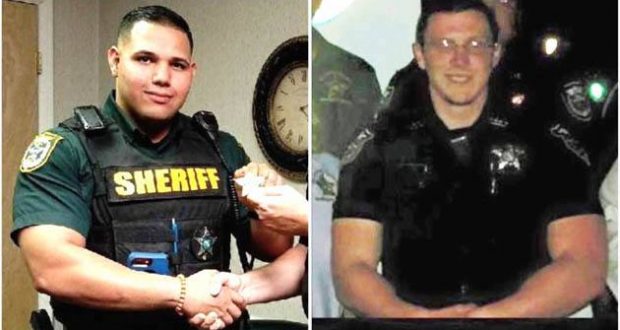 The nation’s growing subculture of hating on the police has seemingly contributed to the murder of two more officers.

Two young deputies in Florida were murdered in broad daylight on Thursday afternoon.  Investigators are calling it a senseless act of violence.

Sgt. Noel Ramirez, 29, and Deputy Taylor Lindsey, 25, were just sitting down for lunch at the Ace China restaurant in Trenton, Florida, when a lone gunman approached the window and fired two shots – killing them instantly.

The killings are two more examples of the nation’s law enforcement being targeted for assassination.

“What do you expect happens when you demonize law enforcement to the extent that it has been demonized?” asked Gilchrist County Sheriff Bobby Shultz. “Every type of hate. Every type of put down you can think of — the only thing these men were guilty of was wanting to protect you and me.”

As students walk out of their high schools across the nation today in protest of student deaths in schools, one fact has been ignored–the numbers of police officers routinely losing their lives.

In the last 10 years, 1,482 police officers have been killed in the line of duty.

David Hogg, the student leader and survivor of the Florida high school shooting has been seen as adding to the culture of hate of police officers.

Surprisingly, the protests across the nation have taken an anti-police tone in many instances. Hogg, who recently signed a lucrative book deal and has virtually dropped out of school to make the rounds of TV networks, has himself added to the dark conversation. A quick review of his comments on both the cable news networks and his self-styled YouTube channel, shows him in profanity laden tirades against the police now charged with patrolling his high school. He has also retweeted anti-police comments.

Some say that type of behavior is not encouraging respect among young people or the public for police officers but rather making law enforcement targets.

While details about the motivation in the Florida police murders are unclear, it is clear there was no confrontation between the two police officers and the gunman.

Bullet holes are visible in the window where the man opened fire from the sidewalk. They were ambushed with no chance to return fire, investigators say, murdered in cold blood. The gunman was found dead in the parking lot.

“You’re just one call away from something like this,” Sheriff Bobby Shultz said.

Shocked and devastated, law enforcement agencies across the state are again mourning for two of their own.

“They were the best of the best,” Shultz said. “They were men of integrity. They are men of loyalty. God fearing and they loved what they did.”

Shultz said he knew the two men personally and met with their families.

“I told them that they can be proud of those men,” he said.

The shooter has been identified as 59-year-old John Hubert Highnote of Bell. Sheriff Schultz had one thing to say about attacks against law enforcement.

“People now are more willing to engage the police in combat,” Sutton said. “Last year approximately 50,000 law enforcement officers were assaulted, that ran the gamut from pushing them to shooting them and causing disabling injuries.”

“Part of the war on cops the failure of police leadership to step up to the place and not acquiesce to political considerations when it comes to the safety of police officers,” Sutton said. “The other part of the war on cops is the failure of the media to post anything positive about police. All they do is put up damaging stories and spin much of that into a narrative that is false and perpetuates a distorted narrative.”

While the nation is continuing to have discussions, led by studens, on gun violence, it may need to take a hard look at the language of those protesting may be using and if it is fueling senseless deaths of those charged with our protection.