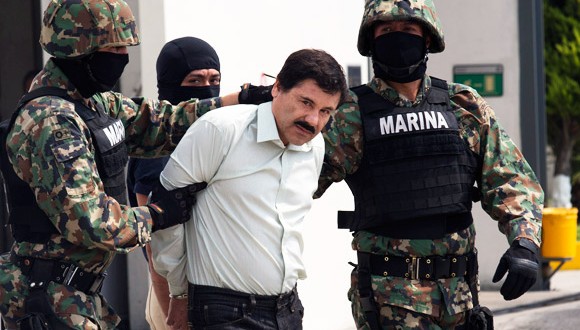 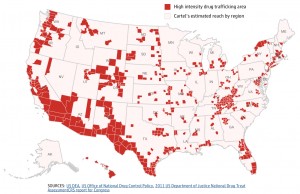 On Feb. 22, Joaquin ‘El Chapo’ GuzmÃ¡n, leader of the Mexican-based Sinaloa drug cartel, was arrested on charges of drug trafficking. The arrest highlighted a Mexican crackdown on illicit drug trade which has continued to grow in recent years and has the prospect of exploding with the legalization of marijuana in Colorado and other states. Data from a 2011 study by the National Drug Intelligence Center shows the cartel’s enormous reach across the the United States. It is, by far, the biggest cartel supplier of drugs to American cities. NDIC estimates of the organization’s reach are a snapshot of the full supply chain, including indirect distribution through third parties who bought drugs from the cartel in Mexico and carried them across the border.
Readers may ask what, if anything, this news has to do with Kansas City, Topeka or even cities lIke Salina, Kan. and Columbia, Mo.
Quite a bit. All are located in counties in which the cartel has significant operations. (Click the map for larger view)
The map shows U.S. counties which have been designated as high-intensity drug trafficking areas, which receive significant federal, state and local resources to combat the illegal drug trade.
More than 16 percent of all U.S. counties are labeled as significant centers of illegal drug production, manufacturing, importation and distribution.
Four counties on the Kansas side of the metro with high-intensity operations include Johnson, Wyandotte, Leavenworth, and Miami. Other Kansas counties include Shawnee (Topeka) Franklin, Saline (Salina), Barton, Sedwick (Wichita), Finney, Seward, LaBette, Crawford and Cherokee.
The news isn’t any better on the Missouri side of the metro. Area counties include Clay, Platte, Clinton and Buchanan.
Other Missouri counties include Jasper, Green and Christian (Springfield area), Boone, Texas, Franklin, St. Charles, St. Louis, Jefferson (St. Louis suburban counties, plus Cape Girardeau and Scott counties.
It is interesting that in both Missouri and Kansas, many of the listed counties have large populations of college students.
Of the other six major cartels operating in the U.S., only the Juarez Cartel has the same extremely high livels of operations in Kansas and Missouri, and those counties mirror exactly the Sinaloa Cartel operations.