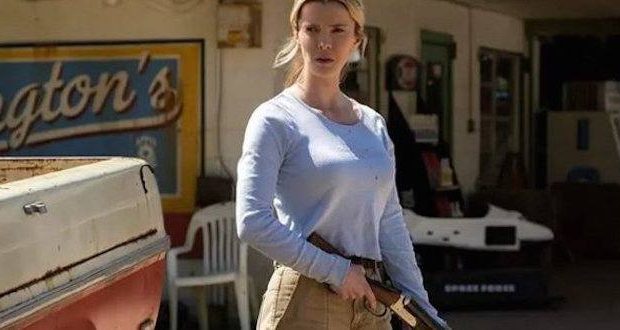 Betty Gilpin stars in "The Hunt," which is slated to hit theaters in September. (Universal Pictures)

Movie ‘The Hunt’ plans to show Trump voters being murdered

“The Hunt,” a movie that shows “liberal elites” hunting down “deplorables,” is still planned for a September release despite a major backlash regarding the film’s violent premise.

“Did anyone see what our [expletive]-in-chief just did?” one character asks others early in the movie, reported the Hollywood Reporter. “At least The Hunt’s coming up. Nothing better than going out to the Manor and slaughtering a dozen deplorables.”

There’s little material available about the contents of the film, but the inference is the hunters are liberal elites and the people who are being hunted are supporters of President Trump. “Deplorables” is a description infamously used by ex-Democratic presidential contender Hillary Clinton to describe Trump supporters.

NBC Universal said that it was moving forward with plans to release the film despite major backlash over its premise.

“There are no plans to not release the movie. No plans to move the release,” a studio source told Fox News.

The source said that executives at the company are aware of the objections to the film’s plot but aren’t taking action at this time. The decision comes after at least one advertisement was pulled from television following mass shootings in Texas and Ohio.

Universal Pictures has shed little light on the movie apart from releasing a standard short description and two brief trailers.

The trailers show people hunting others, who according to the official description are 12 strangers who wake up in a clearing and “don’t know where they are or how they got there.”

According to the Reporter, “the violent, R-rated film from producer Jason Blum’s Blumhouse follows a dozen MAGA types who wake up in a clearing and realize they are being stalked for sport by elite liberals.”

“In the shadow of a dark internet conspiracy theory, a bunch of elites gathers for the very first time at a remote Manor House to hunt humans for sport. But the elites’ master plan is about to be derailed because one of the hunted, Crystal, knows The Hunters’ game better than they do. She turns the tables on the killers, picking them off, one by one, as she makes her way toward the mysterious woman at the center of it all,” the official description added.

An uproar ensued this week after news of the movie and its premise circulated.

“But give up your guns. We’ll only fantasize about killing you,” added another.

“This is tragedy exploitation and incitement to violence it is not satire,” added another, referring to how “The Hunt” is supposedly satirical.

“I’m not sure Hollywood signaling that American liberals want to or should murder their political opponents is the way to go in an election year but hey that’s me,” added another.

“Let’s imagine the outcry, and riots in the streets if a movie came out about people hunting down liberals, as opposed to ‘deplorables,’ as with this POS,” added another.