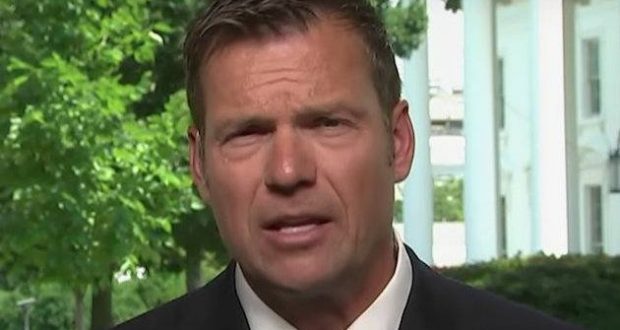 Kansas Secretary of State Kris Kobach has recused himself from the vote-counting process in the closely contested Republican gubernatorial primary. The move is seen as an extraordinary measure to ensure the public’s confidence in the vote tallying procedure and was not required by law.

The Kansas Secretary of State had told CNN he would do so if asked to by his opponent.

“There really is no point to it, but I’ve said if my opponent wishes me to, I’d be happy to. It’s purely symbolic. I don’t think he understands the process,” Kobach told CNN.

On Thursday Kansas Gov. Jeff Colyer had called for Secretary of State Kris Kobach to recuse himself from the canvassing process in their race for the Republican gubernatorial nomination. The recusal was more for political points and will have little impact on the vote count as it is done on the county level–a fact that Colyer did not admit.

Colyer’s push for Kobach’s recusal came soon after Kobach’s lead over Colyer in the unofficial statewide tally from Tuesday’s primary dropped to less than 100 votes.

Various media outlets had discovered discrepencies in several other counties, including Wyandotte County, leaving the exact difference between Kobach and Colyer uncertain.

In his letter directed to Kobach, Colyer called for Attorney General Derek Schmidt to oversee the vote count instead of Kobach.

Colyer wrote he had heard rumors of Kobach directing county election officials to toss out some mail-in ballots. While it is normal for a percentage of mail-in ballots to be “tossed” it is generally a result of incomplete or illegible ballots.  No county officials had suggested anything out of the ordinary.

Colyer also said he has set up a “voting integrity hotline,” citing “countless reports” from voters saying they had issues at the polls. The “countless” reports are apparently a handful of phone calls from people who had difficulty finding the correct polling place or had discovered they had moved and not re-registered in the correct district. It appears that there were no widespread issues with any voting irregularities.

Sec. of State Kris Kobach fired back in a letter Friday afternoon against allegations from Gov. Jeff Colyer that Kobach called “incorrect” and with potential to “undermine the public’s confidence in the election process.”

However, Kobach also said he considered Colyer’s comments and appointed Assistant Sec. of State Eric Rucker to carry out election responsibilities until the outcome of the primary election is decided.

“Although I would discharge my duties ethically, impartially, and responsibly, I have carefully considered your request and have decided that it is in the best interest of the citizens of Kansas that I permit another to perform the duties of the secretary of state until the conclusion of the 2018 primary election process,” Kobach wrote in his response to Colyer.

Colyer had suggested Kobach ask Attorney General Derek Schmidt to take over, but Kobach stated that was not possible under Kansas law, but Kobach said that wasn’t possible.

“No other state office is permitted to exercise these responsibilities under law,” Kobach wrote. “I will not breach the public trust and arbitrarily assign my responsibilities to another office that is not granted such authority by the laws of Kansas.”

Kobach’s letter also defended advice he and his staff have offered county elections officials, saying it is in accordance with state law. Colyer’s campaign accused Kobach of telling counties to disregard mail ballots that came in after Tuesday and to disregard provisional ballots cast by unaffiliated voters.

“As governor of Kansas, your unrestrained rhetoric has the potential to undermine the public’s confidence in the election process,” Kobach wrote. “May I suggest that you trust the people of Kansas have made the right decision at the polls and that our election officials will properly determine the result as they do in every election.”

Kobach concluded by reminding Colyer that the governor and lieutenant governor also play roles in the election process through the state canvassing board and state objection board. Kobach said he would not publicly call on them to recuse themselves from those positions, but added, “should you decide to follow my lead and address any appearance of a conflict of interest by removing yourselves from these boards, please let my office know immediately and let my office know who will serve on these boards in your place.”

County canvassing boards are set to begin meeting next week to certify their county’s results.