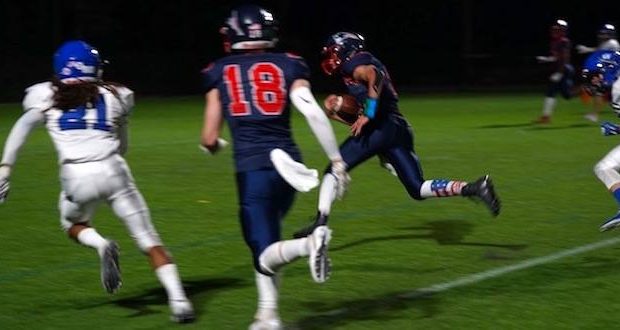 The only Kansas City area high school football team playing for a National Championship, and defending their title this weekend, is No. 1 ranked Christ Prep Academy (CPA), of Lenexa, Kansas.

CPA has beaten the No. 4 ranked North Georgia Force, by a score of 25-3 in a semi-final game that almost witnessed their 8th shutout of the year.

Last year’s tournament MVP, Noah Blair QB/CB, along with a dominating defensive unit, will be leading this CPA (11-1) team against a familiar foe on Saturday, in Tulsa’s No. 3 ranked NOAH (8-3). CPA already beat NOAH earlier this year, by a score of 41-14. The Georgia team took down No. 2 ranked Lighthouse Christian High School, of Springfield, Mo., in the early game Thursday night, by a score of 54-46 – avenging an earlier season loss to the same team.

These two teams (CPA and NOAH) have faced off six times over the past decade, winning 3 games each. Saturday’s match up will be the tie-breaker. Christ Prep has won the two most recent games, in 2018 and 2019.

Georgia Force – the football program is committed, through the sport of football and cheerleading, to encourage, lead, teach and develop young men and women to be Godly leaders within the community based on Christian principles. Force Athletics is a not-for-profit organization established for the benefit of home educated or private school students who are interested in participating in competitive sports and cheerleading programs.

In 1998 the Oklahoma homeschool community was a dynamic and growing entity that consisted of numerous grassroots organizations dedicated to assisting families choosing to educate their children at home.  One of the greatest needs was an organization that provided athletic programs to student-athletes.  The Northeast Oklahoma Association of Homeschools (NOAH) was founded to realize this need and has become an umbrella organization for a plethora of sports.

Christ Prep football began in 2003 when Dick Burton, a homeschool Dad, desired to see character taught and modeled to his own sons and saw football as a tool that could be used to do just that. 15+ years later, and through the succeeding 3 head coaches after Coach Burton (Dave Wallace, Jim Cook & Tom Hurley), the same passion and desire is at the heart of this program and runs through the entire coaching staff, administrative staff & numerous volunteers who devote countless hours to making this program available to young men throughout the Kansas City metro area.

Over the years Christ Prep Football has had much success. With winning seasons in 12 of 16 years, a record of 21-3 in the past two years, and over 30 alumni who have gone on to play at the collegiate level, our program is judged by the young men who have come through it, still following Christ, are faithful husbands & fathers, involved in and supporting their local church, providing for their families and benefiting society.

The only loss suffered by Christ Prep in 2019 was to a Kansas Class 1A Olpe team that went 10-1, losing in their state playoffs to Centralia, KS.

NHFA is the National Homeschool Football Association, made up of homeschool high schools around the country. Sixteen schools send their football teams to this annual tournament to compete for 7 Bowl Games with the top four ranked teams playing in the championship bracket. The 2019 tournament teams are from Louisiana, Maryland, Kansas, Indiana, Texas, Georgia, Ohio, Missouri, Tennessee, Oklahoma and Virginia.

For more information on the tournament, go to the NHFA website: http://www.homeschool-football.com/