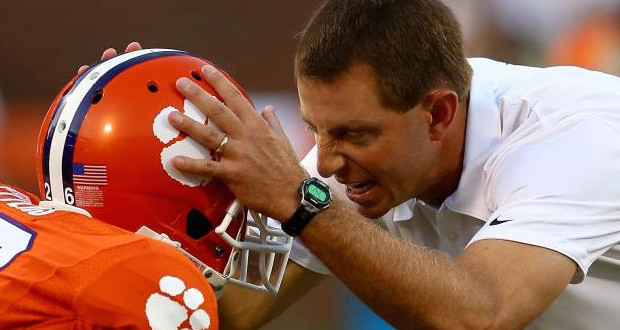 Last night, in an exciting, down-to-the-wire College Football Playoff National Championship Game in Tampa, the Clemson Tigers took home the trophy after a 35-year wait. And at the helm was Head Coach Dabo Swinney, a longtime friend of the Fellowship of Christian Athletes (FCA, www.fca.org).

“The Fellowship of Christian Athletes couldn’t be happier for Dabo Swinney and the Clemson Tigers,” said Shane Williamson, President and CEO of FCA. “His testimony both on and off the field shines a light on his commitment to Christ, and we’re thankful for the way he has impacted not only scores of players over the years, but FCA as well. And FCA also congratulates the Alabama Crimson Tide on an incredible season.”

More than 50 college football standouts, including players from both Clemson and Alabama, talked to Fellowship of Christian Athletes Magazine for its annual college football edition about their faith and why being “bold and courageous” for Christ helps guide their lives both on and off the football field.

Said Clemson’s Artavis Scott, “You only really learn the strength of your spine when your back is against the wall. ‘Jesus Christ is the same yesterday, today, and forever.’ Hebrews 13:8 (HCSB).”

Added Andy Teasdall of the Tigers, “No matter what I face, I keep my eyes fixed ahead on the Lord and continue to keep moving forward. With Him, everything will be all right.”

And Alabama’s JK Scott remarked, “My identity is in Christ, not in football, and that changes everything. When I truly believe what He says about me, nothing else really matters. My boldness and courage come from that.”

Last year, Swinney was honored with the Home Depot National Coach of the Year Award, and FCA also named Swinney the 2014 Grant Teaff Coach of the Year Award recipient. Named after Grant Teaff, former Baylor University coach and Trustee Emeritus of the FCA Board of Trustees, the award recognizes a football coach who exemplifies Christian principles and who is involved in FCA.

FCA also highlighted Swinney in its “Heart of a Coach” feature in a past magazine, where he told FCA that he accepted Christ through FCA while in high school in Pelham, Ala. One of Swinney’s childhood heroes, Joey Jones, a great receiver at Alabama, spoke at an FCA meeting, he recalled.

“I was fired up to hear him and thought he would talk about football,” Swinney told FCA, “but, instead, he talked about what God had done in his life. He offered us the opportunity to be saved, and the next thing I knew I was praying with Joey Jones and accepting Christ as my Lord and Savior. I went home that night and wrote in my Bible, ‘February 3, 1986—I dedicated my life to the Lord today, and He will be with me forever.’”

Today, Swinney says, he has ups and downs like everyone else, but has had the “true peace, happiness and hope that can only come from having a solid spiritual foundation in knowing Jesus Christ as my Savior.”

Swinney has also said of the 62-year-old international sports ministry: “FCA is important because it is on the front lines with our young people spreading the good news about the peace and hope that can only come from a relationship with Jesus Christ.”

Previous: How Can Families, Pastors and People in the Pews Redefine ‘Success’ in 2017?
Next: ‘Silence’ speaks volumes about faith