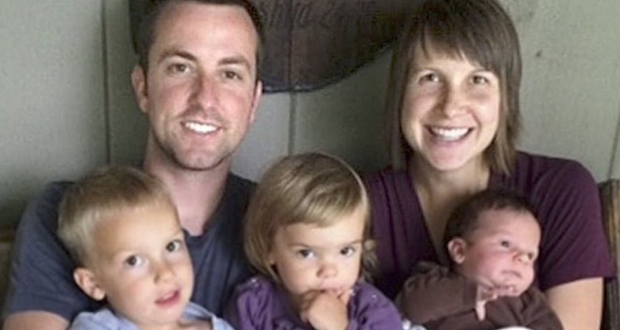 Crash kills missionary family of 5 on way to training

A young missionary family of five from Bethlehem Baptist Church in Minneapolis is being mourned after a highway crash in western Nebraska took their lives July 31.

Jamison and Kathryne Pals, both 29, and their three children, Ezra, Violet and Calvin, ages 4 years to 2 months, died when their minivan was rear-ended by a semitrailer truck in a construction zone on Interstate 80.

The Pals were headed to Littleton, Colo., for a final session of training before leaving in late October to serve as missionaries with Christ Bible Institute in Nagoya, Japan, according to a statement released by the church. The couple had sold most of their belongings in preparation for the move and had just left a water park to complete the final three hours of their 13-hour journey, Minneapolis-area media reported.

A statement released by Bethlehem Baptist Church, part of the Baptist General Conference, pointed to the unique hope Christians have when dealing with death.

“As a church, we greatly grieve the losses of Jamison and Kathryne Pals, and their precious children, Ezra, Violet, and Calvin. We deeply love them, and will sorely miss them,” said church spokesmen Jason Meyer and Kenny Stokes. “Some look at death and see a tragedy — the tragic end of all their hopes and dreams. As Christians, we look death in the face and see ultimate victory, not tragedy, because Jesus defeated sin and death for all of his people.”

The Pals had written about their preparations for missionary service on a blog called “For the joy of Japan.”

“Jesus Christ is everything. You could take away all else in our lives — money, home, health, family, friends, the inter-web — and we would still be rich in Christ,” Jamison Pals wrote on the blog. “We cherish Jesus Christ. We know that he is worthy of love, trust, adoration and obedience, no matter what people group you belong to or culture you identify with. We simply want to play a small part in bringing these things about for people in Japan. We want Jesus Christ for Japan. That’s what ‘the joy of Japan’ really means.”

Kathryne Pals saw her mission through the lens of motherhood: “You can be a mom anywhere in the world,” she wrote. “Why not be a mom living among other moms who don’t yet know Jesus? Why not raise children who make friends with other children who’ve never heard the gospel before?”

The impact of the collision pushed the Pals’ vehicle into three other vehicles, and both the car and the truck burst into flames, the Minneapolis Star Tribune reported. The driver of the semitrailer truck was charged with five felony counts of vehicular homicide.

Funeral arrangements for the family are pending, the church said.

Tagged with: crash I-80 missionary nebraska

Previous: Simone Manuel gets gold, gives glory to God
Next: Regional festivals help you celebrate the goodness of America