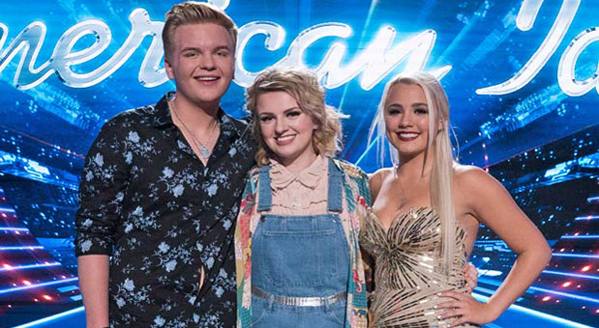 When Barret was eliminated first and the final two were awaiting the announcement of the winner, Hutchinson revealed that they were a couple, having been dating since January 21.

“When I looked over at Maddie, I was like, ‘I win either way,’” he said later.

There was a stunned reaction from the crowd when it was announced that Barrett had been eliminated; she had been considered a favorite throughout the competition.

Barrett seemed to be the crowd favorite for some time, and had twice as many Twitter followers as Hutchinson and Poppe.

Many on social media talked about the vote being “rigged,” and some accused ABC of staging a “Disney ending,” with the announcement of the top two being a couple, followed by awarding them a trip to a Disney resort in Hawaii. ABC’s parent company is Disney. Others noted that it seemed rigged when Judge Katy Perry said she was voting for Poppe after her performance the night before.

Barrett and Hutchinson were two of the professed Christians that composed a majority of the Top 10 contestants.

It looks like there are no hard feelings from Barrett, though. She tweeted her congratulations to winner Maddie Poppe after the loss and wrote that her experience was positive:

“Congratulations to Maddie!!!! Girl you deserve it!!!! What an amazing ride. Sign up for the second season of American Idol. You will absolutely have fun!!! Much Love!!”

“Coming into this, I didn’t know how far I was going to make it. Finishing in the top three was everything I could have asked for. Unfortunately, I didn’t win it,” Barrett said. “… but I promise I’ve got big stuff coming.”

Barrett, 18, will hit the road to perform with Poppe, Hutchinson and the rest of the show’s top seven contestants on the “American Idol Live!” tour this summer. Barrett said she will also join Luke Bryan in Pittsburgh when the “Idol” judge brings his “What Makes You Country XL” tour to Heinz Field on June 30.

“I’m so happy with the people that I’ve met along the way. We’ll see what comes of this,” Barrett said. “I’m just so happy to have been a part of this.”

Barrett also came out of the competition with a relationship. Cade Foehner was her shoulder to lean on after she was eliminated on the ‘Idol’ finale. Gabby gushed in a post-finale interview how her beau ‘calmed’ her down backstage.

“As soon as I was eliminated and got off the stage, I saw my parents which was very nice,” Gabby told reporters. “I went back to the lounge, and he [Cade] was the first person right there. So he calmed me down, he calmed me down a lot. And just to know that you have all that love and support and realize that this has been such a great journey, and you don’t focus on the negative part or what you wanted. It is not what you want. It is what God has planned for you… So we will see what comes from this. I still want to sell out Madison Square Garden!”

She also had nice things to say about Hutchinson.

“He has stood out to me from the beginning and I just think he’s incredible,” Barrett said in an interview. “He’s a good kid. He really is. He deserves to be here and he deserves all of this.”

Hutchinson seemed totally satisfied with the outcome, tweeting “MY GIRLFRIEND WON AMERICAN IDOL!!! No one deserved it more than you babe. I am honored to know you and even more honored to call you mine. Don’t forget about me. I love you.”

No matter what the night’s outcome was, judge Lionel Richie noted that the journey has really just begun for all three contestants.

“What’s going to happen after “American Idol” is then their lives are going to really start,” Richie said. “This is the warmup. If I may say, this is the class. Real life is a whole different ballgame.”

Previous: Work hard, be humble is best advice for graduates
Next: Who are Evangelicals? The NAE tries to explain them with new description