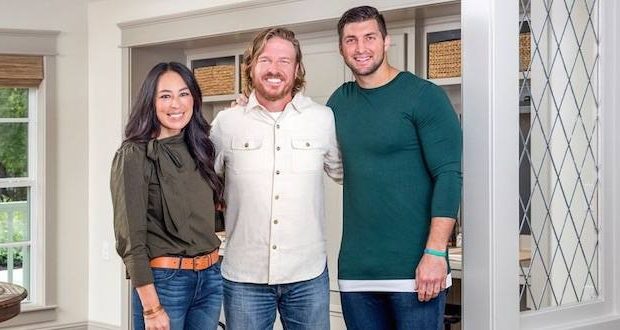 Two guest appearances will entice fans to tune into”Fixer Upper” this month. The show, hosted by Christians Chip and Joanna Gaines, is the most popular show on the HGTV network.

On the Tuesday, Jan. 23 episode, the Gaineses get help from former first lady Laura Bush. Bush, also a native Texan, will the couple on renovating a home on the Gaines’ good friend Jimmy Don Holmes’ property in Crawford, Texas where the Bushes still keep a residence.

On the Jan. 30 episode, Tim Tebow will make a cameo appearance.

The Gaines work with Tebow and his foundation, the Tim Tebow Foundation, to help make a wheelchair-accessible house for the Copp Family. The Copps have two sons in wheelchairs and need a home that can accommodate their needs. Soon the whole community is pitching in for the family to have their dream home.

This will be the final season for the renovation reality stars. The couple is expecting their fifth child and decided in 2017 to leave the show in order to focus on their growing family.

The couple will continue their store and line of home furnishings sold across the country.

Prior to “Fixer Upper,” Chip and Joanna Gaines worked with clients on buying and remodeling homes. In total, the couple had worked on over 100 homes. On the show, Joanna and Chip start by showing one couple three potential homes for purchase in central Texas, each of which requires a varying amount of repair or renovation. Once the couple chooses their home, Joanna designs it while Chip is the lead contractor. The buyers typically have an overall budget of under $200,000 with at least $30,000 in renovations.

Since Fixer Upper’s 2013 premiere, Waco, TX natives Chip Gaines and Joanna Gaines shot from obscurity to worldwide fame as they won the hearts of millions of fans with the highly rated HGTV series. “I don’t see how we could be happier,” Chip reflected last year, but the duo just revealed some news that’s bringing their bliss level to new heights. “Look at the little heartbeat!” Joanna recently gushed, posting a sonogram video on her Instagram page starring their latest bundle of joy, due this summer.

“Think about how lucky they are to have a fifth child and how lucky the kid is to have them,” Jimmy Don Holmes, a friend of the couple, exclusively told Closer Weekly. Jimmy, whose JDH Iron Designs business is featured on Fixer Upper, adds that “they just want a healthy baby” to join their family, which already includes kids Drake, 12, Ella, 11, Duke, 9, and Emmie, 7. “Chip and Joanna are happier than ever,” an insider says of their excitement about expanding their family. Their little ones, after all, are the reason they shockingly announced they’re stepping away from Fixer Upper after its current fifth season. “Motherhood is a gift,” Joanna, 39, says of how her family trumps her celebrity status, “and fostering these little people’s growth is my favorite job of all.”

Previous: Forum offers $1 million to U.N. agency to change policies on refugees
Next: USA Hockey player to take her faith to Olympics