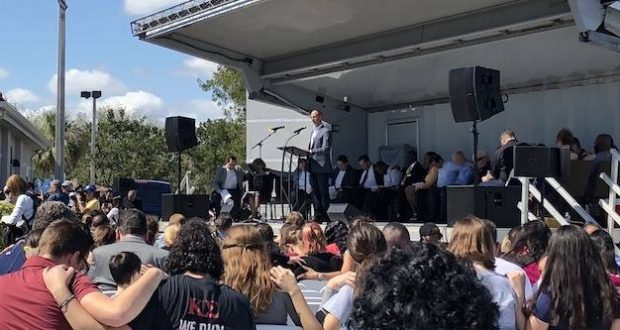 Scripture is read in English, Spanish and French by leaders of a cross-denominational prayer vigil hosted by Parkridge Church after the Feb. 14 school shooting in Parkland, Fla. Photo by Keila Diaz

PARKLAND, Fla. (BP) — Florida Christians are reeling along with all of Florida and the nation after a gunman opened fire at a Parkland high school yesterday (Feb. 14), leaving 17 dead and 14 injured.

While law enforcement and state officials issue calls to prayer at press conferences, churches in the area of Marjory Stoneman Douglas High School are mourning their own losses while offering words of hope and help to those hurting in their community.

The main campus of Church by the Glades is located less than 10 minutes from the school; lead pastor David Hughes said many of the students in the church attend Douglas High.

Hughes held back sobs as he explained that a few families in his church had suffered a fatality and one family has a son who is “gravely injured.” They are still in the process of accounting for all their members connected to the school.

At times like this, Hughes said, people often wrestle with the reasons for the tragedy but that’s not the most important question to be answering.

“What now?” he said is the better question. And “Who wins?”

“Do we let fear and cruelty, violence and hatred win,” Hughes asked, “or do we continue to fight against the darkness and continue to bring the message of hope and light that comes through Jesus Christ?”

Eddie Bevill is pastor of Parkridge Church in Coral Springs, just blocks from where the suspected 19-year-old gunman was taken into custody. He said many Douglas High School employees and students are members of his church family and are still grappling with yesterday’s tragedy. As far as he knew at press time, Bevill said all the members of his church have been accounted for.

“From within our church there is great sadness and a sense of loss,” he said.

Bevill recounted a conversation with a leader in his church who was friends with Aaron Feis, the assistant football coach who is said to have lost his life while shielding students from the bullets with his body and was the first victim to be publicly identified. The man said when they were students themselves, he and Feis had watched together as the events at Columbine High School unfolded on TV in 1999, both of them weeping over the senselessness of it.

Parkridge Church met at Douglas High School for the first seven years of its existence and Bevill said the church has enjoyed a good relationship with the school ever since. They stand ready to help the school and the community through the grieving process, the pastor said.

Part of that was a prayer vigil the church hosted on its property earlier today organized by Church United, a cross-denominational evangelical group. Thousands, including Florida Gov. Rick Scott, turned out to pray for healing and protection and to seek solace and support with grieving neighbors. Many on the platform read Scripture to the crowd in English, Spanish and French and pointed toward “the God of angel armies” as our ultimate source of strength.

“What we’re trying to say to our county is that Christians care because Christ cares,” Bevill said. “We want to be a present help in times of trouble.”

Sal Cavarretta, pastor of the Boca Raton campus of Family Church who attended the vigil, said it was a great showing of how the community of Parkland and neighboring communities are able to come together and support one another.

A brother and sister in his church who attend Douglas High School lost friends and a teacher in the attack. On his way to meet with the students’ family, Cavarretta said, “It is my privilege to be able to go and be a comfort to anyone going through this kind of thing and that, even through this, the Gospel would shine even brighter.”

Billy Young, Next Generation Ministries, said while we don’t have all the answers, we have the ability to point people to the one who does.

And just be there for them.

“Sometimes working with students the most important ministry you can have is the ministry of presence,” he said. “There’s no perfect way to minister here.”

“We find ourselves here once again, sadly,” said Al Fernandez. “But this is an opportunity for the church to be the church. My prayer is that churches around the school can demonstrate the love of Jesus and the Gospel.”

“Once you’re off the front page. it goes out of people’s minds unless you live in that community,” he said, “but we will need to continue to be lifted up in the weeks and months to come.”

Previous: Hiding the cheeseburger: What are the best kids meals?
Next: Christians prevented from holding services as authorities impose fine