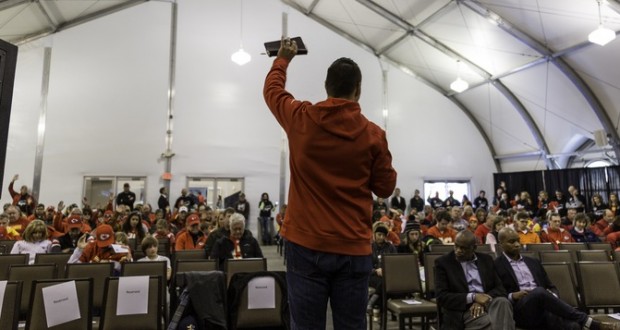 On Sunday afternoons in the fall, Arrowhead Stadium is home to the largest prayer meeting in Kansas City. More than 75,000 Chiefs fans pray for a first down, a goal-line stand or long field-goal attempt.

And since the beginning of the 2014 season, the fans have also had the opportunity to gather for pregame worship at the Pavilion at Arrowhead, which is adjacent to the stadium.

The FCA Faith and Family Chapel, the first of its kind in the NFL, grew out of a conversation between Chiefs chaplain Phillip Kelley and Marcellus Casey, the FCA Metro Kansas City director. 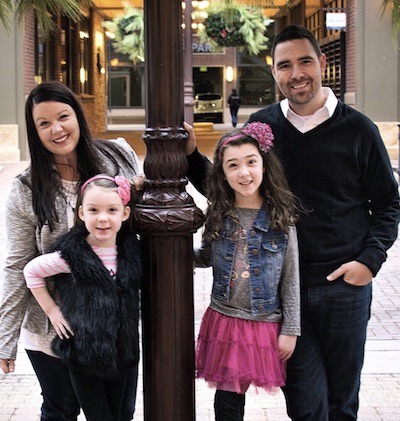 We talked about providing a worship opportunity for fans who typically would go to church on Sundays,” Kelley said. “We got the permission and blessing of the Chiefs, and the response has been phenomenal.

“We have a worship band and just teach from the Bible, share our testimonies and offer people an opportunity to pray for them. We are nondenominational and encourage people to come as they are.”

Kelley previously was spiritual development pastor at Grace Church in Overland Park. He built a relationship with several Chiefs players who attended the church, including Dustin Colquitt, Matt Cassel and Brady Quinn. The team’s chaplain left during the 2013 preseason, and the team asked Kelley to speak.

“After the first chapel, they asked me to be their speaker for the season,” he said. “I said if you just want me to speak, I probably am not your person. I’m a pastor. I told them if you want me to shepherd these men and tell them what they need to hear instead of just what they want to hear, then I’ll do it. They joked that NFL stands for `Not For Long’, but it has been a great relationship.”

Kelley left his position at Grace and raises his own support through Athletes in Action. The organization provides chaplains for 15 NFL teams, as well as for the Super Bowl, owner meetings and other events. In addition to pregame chapels, Kelley leads a Bible study for Chiefs coaches on Friday mornings.

Although he doesn’t travel with the team, he arranges speakers for chapel services on the road. He found a Christian rugby player from Wales to speak at the Nov. 1 game against the Detroit Lions in London.

“We planned to hold services at Kauffman Stadium until the Royals made the World Series during the week of our first service,” Kelley said. “Who would have guessed? The Arrowhead Pavilion happened to be open, so we took it.”

A “street team” starts walking the parking lot at 7:30 a.m. on game days, passing out flyers and offering free coffee and doughnuts. Services begin at 9:30 a.m. and last 45 minutes, leaving fans plenty of time to tailgate and be in their seats by kickoff. Kelley and Casey optimistically set up 350 chairs, and all are filled. 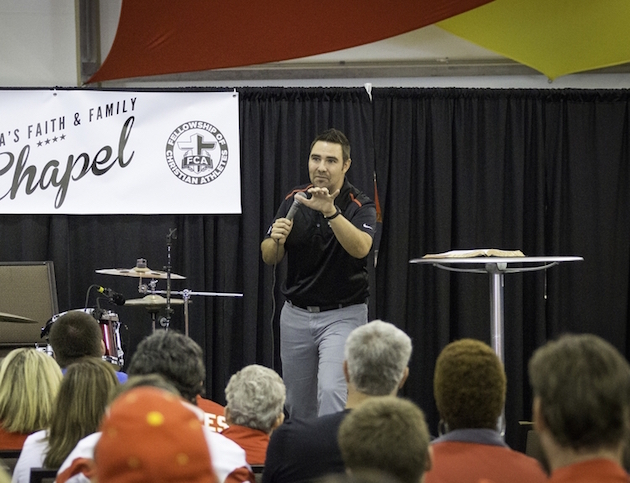 Kelley addresses the growing crowds at the pre-game worship services.

“We didn’t know what to expect when we started,” he said. “It was like making spaghetti – we threw things against the wall to see what would stick. One person said his family has been season ticket holders for 42 years, and this was the best thing the Chiefs have done.”

A diverse group of fans attends services, including members of the Hunt family, which owns the Chiefs.

“We have Protestants, Catholics, atheists and everyone in between,” Kelley said. “One atheist said, `I don’t believe what you believe, but I believe in what you are doing’.”

Congregations from across the city are invited to participate. Remaining chapels for this season include:

Kelley believes God has placed him in his current position to influence the influencers, which can have a multiplier effect on society.

“I have an opportunity to speak into the lives of athletes, their wives and families, and the organization,” he said. They have such a network and platform to share the gospel. I help train them to articulate their testimonies and possibly reach millions.”