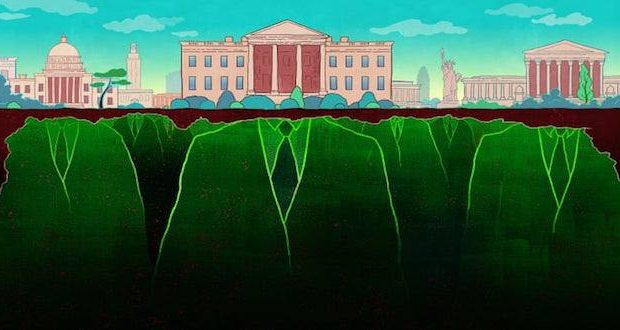 If you follow politics, you’ve heard people talking about the “deep state.” But is there really some sort of coup going on at a deeper level among career bureaucrats in Washington, or is it just a fantasy?

At a recent Federalist Society dinner in Washington, US Attorney General William Barr said an “avalanche of subpoenas” and constant attempts to derail Trump administration appointments only serve to ‘incapacitate” the executive branch.

He stopped short of calling what is happening in Washington a political coup, but he suggested forces are engaged in a war to cripple, by any means necessary, a duly elected government.

Referring to the “resistance” language used by Trump opponents, Barr said, “Now ‘resistance’ is the language used to describe insurgency against rule imposed by an occupying military power. It obviously connotes that the government is not legitimate. This is a very dangerous and, indeed, incendiary notation to import into the politics of a democratic republic.”

“The federal government, at least the executive branch, is being denied the ability to execute its responsibilities, whether it’s here in Washington, or in places like Portland, Seattle, Los Angeles and San Francisco where, under the supremacy clause, Washington is very clearly responsible for immigration. There’s much more disruption and much more insurrection in this country than Lincoln faced until the Confederates fired at Ft. Sumter. It’s staggering to be in this position 160 years later,” Scheuer said.

He says the only thing we’ve heard so far in the impeachment hearings is staffers saying they’re very offended because the president didn’t listen to their advice, contending it’s more about sour grapes than evidence of a crime.

Scheuer also says there’s clear ignorance about the Constitution on behalf of Congress. “When the Constitution says ‘bribery,’ the Founders were talking about the President accepting bribes,” not the president making a quid pro quo in exchange for foreign aid, he argues.

Scheuer says the bottom line is there’s a deeper agenda at work here.

“What they’re doing is, as Mr. Barr said, trying to tear down the institutions of this country. They’re not the loyal opposition, they are an infestation of globalists who want to deny nationality to the United States and blend us in with the rest of the world,” he contends.

Previous: How to maintain a work/life balance over the holidays
Next: African-American Senator Scott says Trump innocent of impeachable offense