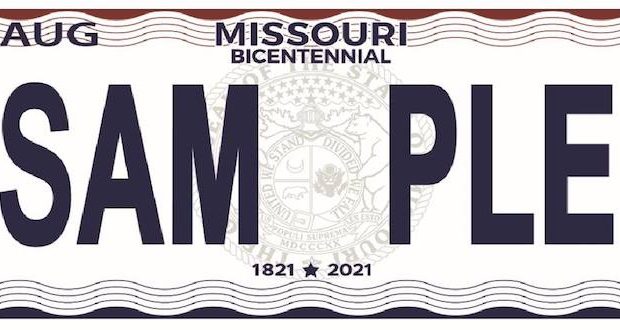 Are you ready for your new Missouri bicentennial license plates?  You’ve may have already seen some as they started appearing on vehicles Oct. 15.

Missouri drivers are supposed to receive the new plates when their license plate registration is up for renewal, state officials say. Replacement of all license plates should be completed by Aug 10, 2021, when Missouri celebrates its bicentennial, or 200 years of being a state.

Everyone getting a new license plate is required to pay a fee:

The combination of letters and numbers on license plates will change with the new bicentennial plates. However, drivers with a personalized plate are allowed to keep the configuration if they communicate that request with the license office.

Drivers with specialty license plates and historic or permanent registrations do not have to get the new license plate design. To find out if you are exempt, go to the Missouri Department of Revenue’s online chart.

The Missouri legislature passed House Bill 2380, which required the Department of Revenue to start reissuing license plates by no later than January 2019.

The department said the bicentennial design is representative of the entire state, not specific to a certain region, “with red waves at the top of the plate and blue waves at the bottom of the plate to symbolize the Missouri flag and Missouri rivers, which figure prominently in the state’s historic role as a gateway for American exploration and transportation. The design also features Missouri’s state seal in the center of the plate, the years 1821 and 2021, and a star.”

The department said it encourages drivers to surrender old plates to a local license office for recycling when obtaining the new plates.

The new license plates are expected to be in circulation for five to 10 years and will replace the current bluebird design, which was introduced in 2008.

The Department of Revenue said license plates have an average lifespan of six years before the material starts to deteriorate.