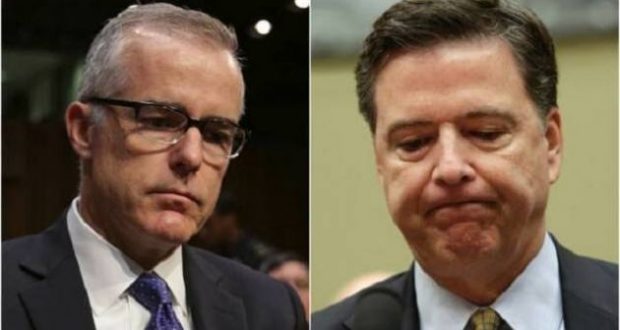 Andrew McCabe is claiming that he did the leaking with James Comey’s approval. They were both in office and approved of the "spy' being inserted into the Trump campaign.

Is ‘Spygate’ real or made-up?

Is “Spygate” real, or just a figment of President Trump’s imagination? As the Justice Department investigates, politicians and pundits on the left and right are weighing in.

James Comey says the “Spygate” conspiracy accusations leveled by President Trump are made up.

“I don’t know where he’s getting it from. Honestly, and a number of things he has announced that were the biggest scandals since Watergate, my guess two weeks from now there will be something different than this,” Comey told talk show host Conan O’Brien.

Fired by President Trump in May 2017, the former FBI director said he doesn’t believe a spy was inserted into the Trump campaign by the FBI or any intelligence agency.

“I don’t find it possible and I know it not to be true,” Comey insisted.

But former federal prosecutor Joe DiGenova told Fox News host Tucker Carlson he believes the Obama administration spied on the Trump 2016 presidential campaign and now is involved in covering it up.

He said Comey, former National Intelligence Director James Clapper, and former CIA Director John Brennan are “a group of psychotics who can’t stop lying” about the Obama administration’s use of intelligence agencies to spy on Trump.

And DiGenova insists President Obama knew about the monitoring and infiltration of the Trump campaign since early January 2017.

“On January 5th, the president, Biden, Yates, Rice, they were discussing exactly what we’re finding out now and they were trying to figure out a way to explain it because they knew since Hillary didn’t win, now it was going to come out and they needed a story,” he explained to Carlson.

Mollie Hemingway, a writer for The Federalist also appeared on Tucker Carlson Tonight. She said Department of Justice officials are withholding information from congressional committees because they are possibly hiding a really dangerous secret. She said some of the people involved in the spying “have admitted there’s a spy.”

“They’re saying, though, because the government term is “human intelligence informant” or something like that that therefore it’s not a spy,” said Hemingway. “Whereas normal Americans understand when you are gathering information on someone surreptitiously, that’s the common definition of spying.”

President Trump insists the FBI planted Halper into his campaign long before the bureau started the Russia collusion investigation.

Within days, a redacted version of the Department of Justice Inspector General report on the DOJ and FBI’s handling of the Hillary Clinton email investigation will be made public.

Justice Watch President Tom Fitton said it’s unclear whose view of the investigation the report will present—Hillary Clinton’s, or her conservative critics. He suggested either way “it will make Comey look bad.”

Clinton blamed Comey for contributing to her election loss because he announced a re-starting of the investigation just days before the November 2016 election.

But conservatives say Comey acted to protect Clinton because two months before she was interviewed by the FBI, he wrote a report recommending she not be prosecuted.

Fitton predicts the credibility of the FBI and Justice Department is likely to take another hit.