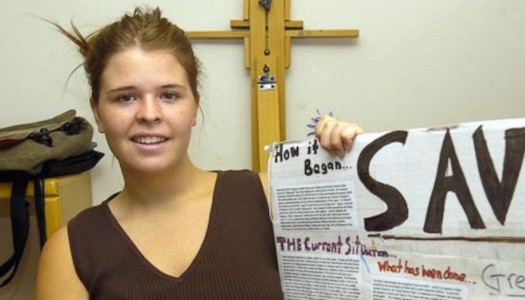 (WNS)–Thousands of friends, family, neighbors, and strangers gathered last night in Prescott, Ariz., to remember Kayla Mueller, the 26-year-old Christian aid worker killed in Syria by the Islamic State. Mueller was working with Syrian refugees at the Turkish border in August 2013 when extremists kidnapped and imprisoned her. The U.S. government confirmed her death in early February.

Local church volunteers and law enforcement from the small northern Arizona town organized Wednesday’s candlelight vigil, at which Mueller’s dad and brother made their first public appearance since news of her death. Her brother, Eric, fought tears as he read from a letter he had written to his sister: “You were my first friend, my best friend, and my only sister.” He asked the crowd to follow her example to help the suffering.

Mueller volunteered both at home and eventually abroad, in Israel, Africa, and Turkey.

“I find God in the suffering eyes reflecting in mine,” she once said. “If this is how you are revealed to me, this is how I will forever seek you.”

Kathleen Day, a campus minister at Northern Arizona University, remembered volunteering with Mueller and other students at the local county jail one Advent. She said after the event was over, Mueller returned often to train female inmates in anger management.

“Seven years ago, at only 19 years of age, Kayla was already learning and teaching about how to experience God in the midst of prison under the shadow of death,” Day said.

Pastor Jon Wolfinger of Lumen Deo church in Prescott said those grieving Mueller’s death had an opportunity to draw near to God.

“It’s moments like these when the darkness seems to taunt us â€¦ we hear the words of God who says he is near to the brokenhearted.”

“What we admire and adore in Kayla we see in the Lord Jesus Christ,” he said. “That God has shown His care for all across all nations by sending His Son.”

The ceremony opened with a recording of the hymn “He Who Began a Good Work in You” (a special request from Mueller’s mom, who used to sing it to her daughter). It ended with the choir from Tri-City Prep School (Mueller’s alma mater) singing “In His Time.”

Attendees brought canned goods to donate to two local organizations. One of the event organizers, Cindy Ksenzulek, lugged a box down the sidewalk after the vigil ended.

“This would be her favorite part,” Ksenzulek said, pointing to the donated food. “It was an overwhelming turnout. I can’t wait to see how many pounds.”

Katia Nyysti signed the memorial book while keeping a close watch on her two wiggly daughters. Nyysti didn’t know Kayla but said she wanted her daughters to learn from her: “I want them to learn how important it really is to care for people and to be available and present and to listen and care. And that having divisions and creating suffering in others doesn’t help.”