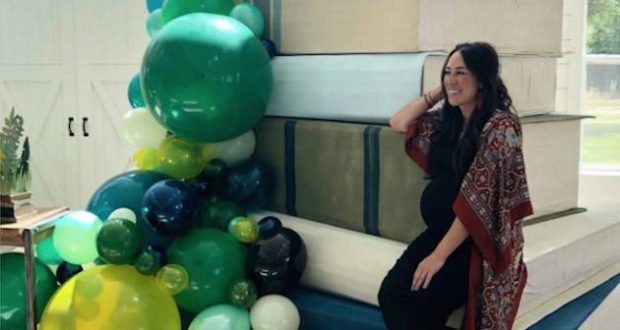 “Fixer Upper” star Joanna Gaines’ baby boy is on the way, and he’s sure to be immersed in literature from an early age if the HGTV star’s book-themed baby shower is any indication.

The expecting mom took to Instagram over the weekend to share snapshots from the sweet festivities, which included a stack of oversized books, along with party décor including an arrangement of blue and green balloons, a typewriter, children’s books, and a leaf-accented cake.

“I like big books and I cannot lie. Blown away by the creativity and thoughtfulness of my friends — just the cutest book shower ever for baby Gaines!” the 40-year-old quipped in a post that has since been liked over 700,000 times.

“Feelin’ the love… now I just need to figure out how to shove these books in my car so I can get them to the farm! #babygotbooks,” added the Waco, Tex. mom, who wore a fitted black dress and a printed burgundy shawl to the celebrations.

The design maven and her husband, Chip, are parents to Drake, 13, Ella Rose, 11, Duke, 9 and Emmy Kay, 8. In a January 2018 interview with People, Gaines divulged that her parenting style is “a little more laid back than I thought I’d be.”

People notes that before they announced the end of their series, Joanna said “Chip thinks we’re done” having kids, even though their children always asked when they’d have another baby. But then, in late October, Chip didn’t seem done at all. He told ABC 13 that he wanted to have more kids, while possibly knowing number five was on the way. “We had four babies right before the show started, and then we’ve had zero babies since the show started,” he said. “For me, I’m really excited to go back and try to maybe…try to make some more babies.”

Though she has yet to officially comment on the matter, Gaines is rumored to give birth in July, Country Living reports.