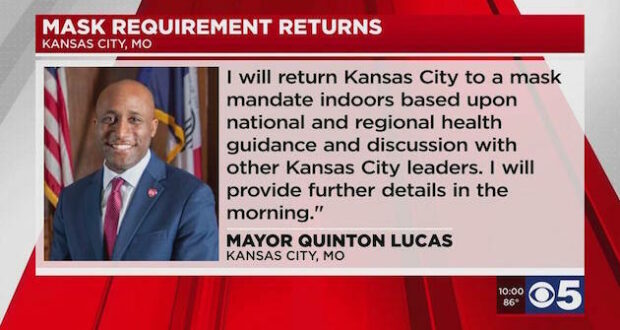 He filed the suit in Jackson County, arguing the mandate is “unreasonable, unconstitutional and arbitrary and capricious” and asking the court to invalidate it. The suit targets Mayor Quinton Lucas, County Regulated Industries Division Director Jim Ready and the city’s health department.

“This continued unconstitutional and unreasonable government overreach must stop, especially in the face of a widely available vaccine,” he said. “Requiring schoolchildren to mask all day while in school is not based in science and is completely ridiculous. I will always stand up for the liberties of the people of Kansas City and Missouri.”

Schmitt pointed to Lucas’ earlier comments stating a mask mandate was no longer needed and opposed the requirement on those in school, arguing it could hinder communication and verbal development. The lawsuit also decried the “vagueness” of the order and argued it should be subject to a bill recently signed into law that reined in local agencies’ ability to issue health orders. Finally, the lawsuit argued Lucas did not have the authority to implement the order, asking the court to find its authorization “invalid and unlawful.”

The mandate began Monday and is in effect until Aug. 28 for places of indoor public accommodation and covers individuals aged 5 and older, regardless of vaccination status. Kansas City reported 883 active cases last week, with less than 40 percent of the city’s population completing vaccination and 46 percent receiving at least an initial dose.

Schmitt’s effort to halt St. Louis County’s mandate succeeded Tuesday afternoon when a judge paused the order until a hearing can be held later this month. The St. Louis County Council voted to end the mandate last week, leading to the temporary pause while the court considers whether the vote can prevail. A similar mandate remains in effect in the city of St. Louis.