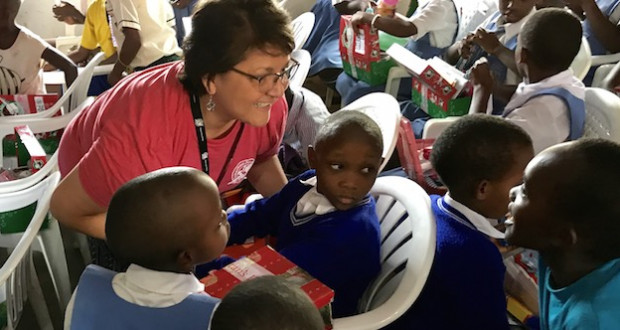 Love, forgiveness and shoeboxes in Rwanda

Operation Christmas Child volunteers spread the love of Jesus in Africa with shoeboxes.

There are many moments from a recent Operation Christmas Child shoebox distribution trip to Rwanda that Kansas City area volunteers Angie Moreno and Cheryl Melvin will never forget.

For Moreno, one of those moments came when she was handing some boxes to a group of three girls who were about fourteen.

“Yes, He loves you, too,” Moreno lovingly assured her.

With that, a couple of the girl’s friends surrounded her and also assured her of Jesus’ love for her. As the girls looked at the items in their boxes, Moreno told them all Jesus loves them just the way they are and has a plan for each one of them. 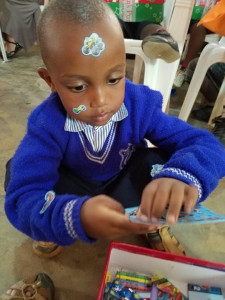 Moreno said she is glad the girl who doubted Jesus’ love had such friends to encourage her, and her prayer for the all three girls is that they would attend The Greatest Journey, Operation Christmas Child’s 12-week discipleship and evangelism program.

For Melvin, one of the most unforgettable moments from the trip was when they laid wreaths and roses at a memorial for victims of the 1994 genocide in the country.

“The thing that made me cry and still challenges me as a Christian is how the people of Rwanda went through a genocide in 1994 where nearly a million of their people were killed violently with machetes and how they managed to build their country back up in 20 years or so,” Melvin said. “Only God allows a country to rebuild, and only God individually rebuilds people’s souls and lives.”

An Operation Christmas Child shoebox recipient and speaker who lost family members during the genocide traveled with the group and shared his story of loss, forgiveness and faith. Additionally, one of the group’s translators was a shoebox recipient who lost family members in the genocide and has a very impactful testimony of forgiveness and God’s provision through devastating circumstances.

Moreno and Melvin both serve in the capacity of area coordinators for Operation Christmas Child. In their roles, they help coordinate efforts to collect shoeboxes and promote the ministry in their respective areas of the Kansas City metro. Samaritan’s Purse invited both women to travel to Rwanda in May as a way for them to see what happens on the other side of the shoebox.

“Watching the children react to the simple items such as soap, washcloths, colored pencils, hats and sunglasses showed me how much the gifts brought them joy,” Moreno

“Watching the children react to the simple items such as soap, washcloths, colored pencils, hats and sunglasses showed me how much the gifts brought them joy,” Moreno said.

More than 936,000 children in Rwanda have received Operation Christmas Child shoebox gifts, and this season 117,624 children will receive gifts. Since 2010, 129,413 Rwandan children have participated in The Greatest Journey discipleship program.

“This trip allowed me to see how God is using Operation Christmas Child shoeboxes to further His kingdom, and He is using all of us to make that happen – one child, one shoebox and one powerful message every time,” Moreno said.

The women attended many shoebox distribution outreach events during the trip. There were between 70 and 200 children at each event, all sitting quietly as they received their box and the gospel presentation was given. The distributions were done in collaboration with local churches and schools.

Moreno said the ministry of Operation Christmas Child extends beyond the children as the mothers also attended the events and would sit and listen during the gospel presentation. She said the demeanor on their faces would change after their children received the boxes, and they too heard that Jesus loves them.

Previous: Summer Baseball and Music: Something For Everyone
Next: August heats up with new music releases