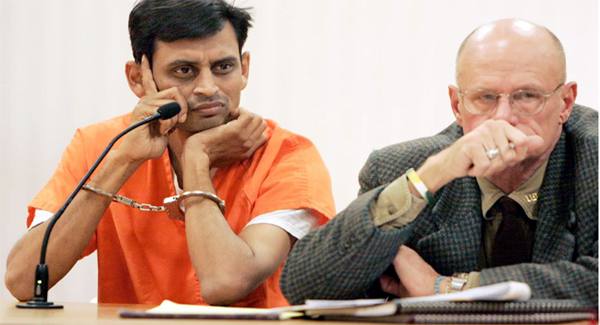 As NRL News Today reports Manishkumar Patel was convicted of attempted first-degree intentional homicide of an unborn child. His girlfriend, Darshana Patel [no relation], was suspicious and did not drink the smoothie that was laced with RU-486. However, she miscarried weeks later.

According to Mueller, Patel expressed remorse during the sentencing, which lasted more than two hours:

“I have had plenty of time to think about what I did,” he said. “I have no excuse or explanation for my actions.”

Patel admitted to obtaining the drug and giving it to his girlfriend when she was pregnant. At the time, Patel said, he justified his actions because their other child had a lifelong medical condition.

“I was convinced my unborn child would suffer the same fate,” he said. “This did not excuse what I did.”

He also sought to explain why he fled the U.S. for India after he was charged. His father’s health seemed to be failing, Patel said, and he felt he needed to see him for what he thought would be the last time.

He claimed he came back because he wanted to resolve the matter before the court.

“I made the decision to return, even though I knew it would cost me my freedom,” he said.

The case goes all the way back to September 17, 2007 when the couple went to an ice cream shop for dessert. Patel brought her a smoothie while she waited outside in the car, but she saw him split the drink into two cups and “frantically” stir the cup, the complaint said. She took the drink when Patel returned to the car, but didn’t drink it.

The woman later looked closely inside the cup and saw a powder inside, the complaint said. She even brought the cup back to the store, where the employees told her they don’t put powder in their smoothies.

The woman had a miscarriage on Sept. 30, 2007, the complaint said. About a week later, she sent samples of the substance in the cup to a lab in California, which confirmed it was a drug used to terminate pregnancies.

A lab run by the Food and Drug Administration later confirmed the results, the complaint said.

Police charged Patel in November 2017. A bench warrant was issued the following January for Patel on multiple charges, including attempted first-degree intentional homicide of an unborn child. He jumped a $750,000 cash bond, posted by family and friends, which he forfeited. All in all, Patel spent about a decade on the run before being arrested in 2017 in New York.

At today’s sentencing the judge said Patel used his intelligence to gain control of another person, Mueller reported.

Patel doesn’t have a long record of criminal offenses, but Des Jardins said he had to consider the severity of the crime and the impact it had on the victims, including the unborn child.

“I think a steep price has to be paid for someone who engages in this type of behavior,” he said.

Previous: New clever bank phishing scam is spreading and it’s duping even the experts
Next: Kansas teen meets with members of Congress about flavored tobacco products