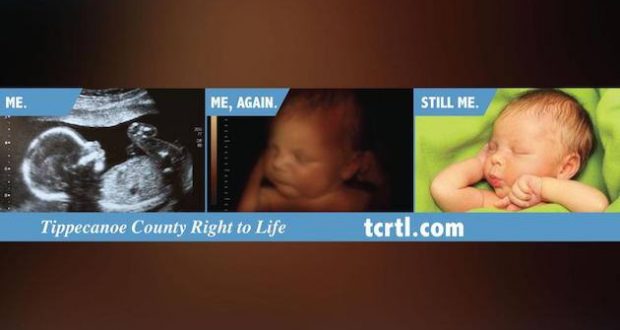 A pro-life group in Indiana is fighting back after a government-run public transit company rejected its bus ad aimed at educating the public about the humanity of unborn children.

The incident unfolded last September when Tippecanoe County Right to Life contacted CityBus about featuring their pro-life messages on buses in the Lafayette area.

The ad in question featured two ultrasound images of an unborn child, and a third showing a newborn wrapped in a blanket. Superimposed over the photos are the words “ME,” “ME, AGAIN,” and “STILL ME.”

Citing concerns that the advertisement featured a “political viewpoint,” the transportation company turned down Tippecanoe’s request, saying it violated their advertising policy.

Now the pro-life group, represented by Alliance Defending Freedom, is filing a complaint against CityBus, suggesting their argument doesn’t pass the sniff test.

The ADF pointed out in a press release that the transit company “has permitted ads declaring a ‘healthcare crisis in Indiana,’ encouraging people to ‘pump some democracy,’ promoting the filing of housing-discrimination complaints, and advocating for vaccinating children against a sexually transmitted disease.”

“An unborn baby’s humanity is a scientific fact, but even debatable ‘political viewpoints’ can’t be silenced by government officials whenever they dislike them,” noted ADF Legal Counsel Samuel Green.

“When the government creates an opportunity for advertising on countless topics, it cannot unreasonably single out life-affirming, educational messages for censorship. The First Amendment protects freedom of speech for all people, regardless of their beliefs,” he said.

Kevin Theriot, senior counsel for the ADF, echoed that sentiment.

“CityBus’s stated reason for denying this ad does not pass constitutional muster. The government cannot arbitrarily apply its policies to permit or exclude ads based on its viewpoint preferences,” he charged.

Theriot added that the transportation company has the same obligation as other government entities to ensure everyone has equal access to their advertising forums.

“We hope that CityBus will quickly change course by permitting our client’s ad and revising its policies so that everyone can exercise their constitutionally protected freedoms,” he said.

Previous: Moved from Turkish prison, American pastor may be near release
Next: Wynter Pitts, author and mother of War Room actress dies unexpectedly