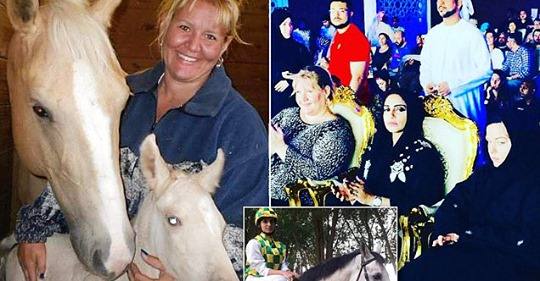 Missouri mother of three, Traci Nichole Coffel (Nichole), is facing a possible jail term in Abu Dhabi because she asked for her unpaid wages and compensation for medical bills after her employer’s horse allegedly bit her. Coffee says that Instead of paying her what she was owed, celebrated UAE jockey, Anoud Sultan Al Suwaidi filed a complaint on June 9 against her with the police, alleging Nichole violated Cybercrime laws by insulting her in the messages she sent requesting her wages.

Nichole had not been paid for three months, and had suffered a severe injury when Al Suwaidi’s stallion bit her. In her WhatsApp messages to Al Suwaidi, Nichole pleaded for her salary and compensation, telling her that it was “haram” not to pay people; using the Arabic word for “religiously forbidden” in an attempt to persuade Al Suwaidi. In her complaint to police, Suwaidi alleged that Nichole had called her “harami”, an Arabic word meaning “thief” or “bastard”; which is regarded as a serious insult in the Gulf.

According to UAE Cybercrime laws, any perceived insult or slander communicated via electronic means is treated as a criminal act, with sentences ranging from fines to lengthy prison sentences and Nichole was told by Abu Dhabi police that she faces up to 5 years in prison. 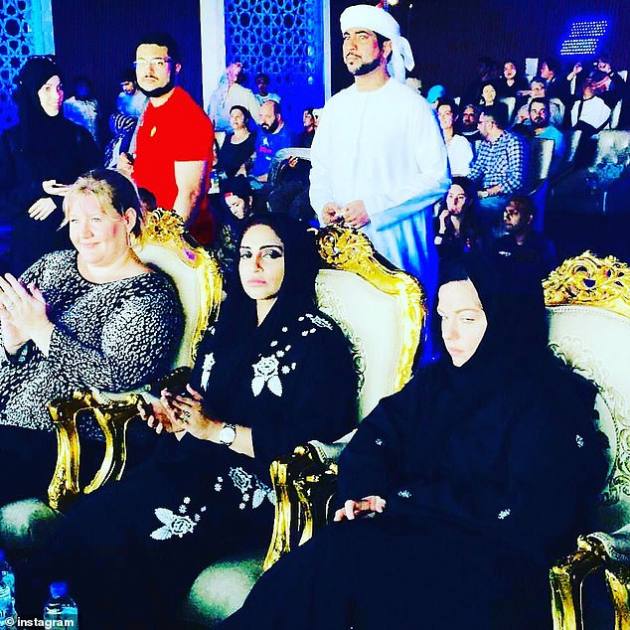 The 45-year-old, who moved to the country three years ago, was working as the COO of Al Suwaidi’s equestrian club and claimed she had been stiffed out of three months’ worth of pay. She is pictured far left with Al Suwaidi (center)

“Nichole did not threaten or insult Ms Al Suwaidi, she simply asked to be paid for her work and for her injuries,” says Radha Stirling, CEO of Detained in Dubai, who has taken up Nichole’s case. “The police who registered the complaint did not speak English, and the language Nichole used in her messages was mistranslated. Nichole herself was held for hours and questioned without a translator until finally the US embassy insisted they provide one remotely. Nichole’s request for payment was calculatedly misconstrued in order to fit the UAE’s opaque definition of a Cybercrime violation, and to distract from Ms Al Suwaidi’s own responsibility to pay Nichole’s wages.”

This is not the first manipulation of the country’s blurry Cybercrime laws. Last March, British national Laleh Shahravesh was arrested for an angry Facebook post she wrote years earlier in the UK about her ex-husband’s new wife. It subsequently emerged that the new wife had likely engineered Laleh’s arrest to prevent any inheritance claims by Laleh’s daughter following the death of her father, Laleh’s ex. “We worked on the case of Australian Scott Richards who was arrested in 2015 for sharing a post on social media for a charity not registered with UAE authorities”, Stirling recounts, “A British man was arrested earlier this year just for posting a critical comment online about a school in Dubai. Fortunately, we were able to persuade the school to drop the charges; but all these cases expose how easy it is to use the Cybercrime laws vindictively, as in the case now with Nichole.”

Al Suwaidi has gone to great lengths to avoid compensating Coffel, including potentially violating cybercrime laws herself. Nichole’s husband is a long time veteran of the US armed forces, and was actually named on a hit list by the terrorist group ISIS for his military service. Al Suwaidi posted Nichole’s name, picture, and phone number on social media without her permission; and against the strict advice of the US State Department concerning publishing personal information of family members of military personnel online. Posting such information potentially put Nichole’s and her family’s lives at risk.

The Missouri native and her family moved to the UAE three years ago, and Nichole has been an active member of the community in Abu Dhabi, where she helped create the Mussafa Dog Project.

“Nichole is committed to the humane treatment of lost and injured animals,” says Stirling, “She has volunteered at animal shelters and rescue organisations in the UAE and back home in the US. Her husband Brian is a 22 year veteran of the Marines and Air Force. They have been upstanding residents in Abu Dhabi, and constantly give back to the country. They had every intention of staying in the UAE for many years; the way they have been treated is terribly upsetting.”

When Nichole was called in to the police station last June she was detained for several hours, her passport was confiscated, and she was forced to sign papers in Arabic. She attempted to file a counter complaint, but later learned that the police never registered the case. “They spent the entire time talking to Anoud,” Nichole says, “They would not even provide a translator when they interviewed me, until the Embassy arranged for them to provide one remotely, but still, they paid no attention to what I had to say. All I did was ask for my salary, and help with covering the cost of the medical bills after Anoud’s horse bit me. Now I’m told I could be jailed for five years, It is so unfair and so scary.”

Nichole’s mother Cathy said “Many staff members have gone without their salaries for months. She knew posting my daughter’s private information online constituted a threat to the safety of my family, and surely that is a bigger Cybercrime violation than someone asking for their wages; but the police did not even let her file a complaint, instead Nichole has to go to court and have her family’s life turned upside down. This whole situation is in-comprehensible”.

“We have contacted Ms Al Suwaidi to encourage her to drop the charges,” Stirling says, “We have contacted the US Embassy in Abu Dhabi to request intervention, and we have reached out to Senator Josh Hawley of Missouri to seek his assistance. Ms Al Suwaidi is abusing her status as a public figure and as a local with influence in the UAE to deny Nichole her rights and wrongfully accuse her. This case is wholly unjustified and it has traumatised an innocent family, all to avoid paying the small sum Ms Al Suwaidi owes. If the charges are not dropped, the authorities should dismiss them as a clearly spiteful manipulation of the law.”

Previous: Is this a seal from the household of King David?
Next: Civil War cannonball discovered lodged in cut-down Independence tree