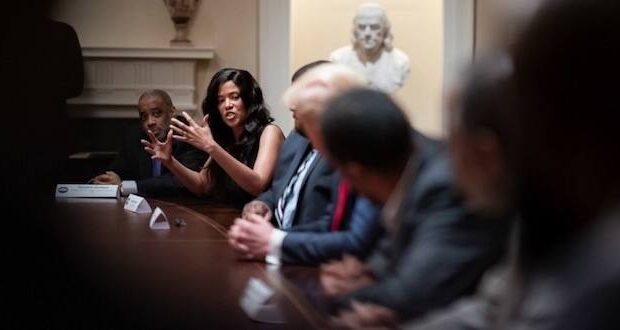 As President Trump’s approval rating remains high among African Americans, he is not shy when it comes to reminding Americans what he has done for the black community. Neither are young black leaders who are praising his policies are historic.

Trump recently told Fox News he continues to work for all Americans but highlighted specific actions he’s taken to broaden economic security for all races.

Trump made the remarks speaking to Fox News’ Harris Faulkner in which he touted his administration’s accomplishments on behalf of communities of color, chiefly in the domains of the economy and criminal justice reform.

“Criminal justice reform — nobody else could have done it. I did it,” Trump said, adding that he didn’t “get a lot of notoriety in the fact that people I did it for then go on television and thank everybody but me, and they needed me to get it done.”

Trump was referring to the First Step Act, a bipartisan criminal justice reform bill (pdf) that he signed into law in 2018, which cut sentences for some offenders and expands programs for prisoners such as job training. The bill also changed some sentencing laws, like reducing the “three strikes” penalty for drug felonies from life to 25 years behind bars.

The president shared his pride for a major initiative he spearheaded in helping underfunded, historically black colleges and universities (HBCU), saying, “I got them funded on a long-term basis.”

“I took care of them,” Trump said of HBCU educational leaders, who the president said told him that they had to plead, year after year, for more funding.

Setting up opportunity zones was another major policy focus Trump touted, saying, “It affects tremendously the employment in areas that were absolutely dead or dying.”

Part of the 2017 Tax Cuts and Jobs Act created opportunity zones aimed to bring investment dollars to some of the country’s most distressed communities. This is being accomplished by incentivizing private capital investments in projects that revitalize these communities. News reports have shown several of those black-owned projects going up in flames during recent rioting over the death of George Floyd.

But the opportunity zone programs have faced obstacles, according to Sonnie Johnson, who attended a roundtable at the White House on Wednesday between African American leaders and Trump.

Johnson said that when opportunity zone funds are allocated at a local level, they face obstacles.

“Instead of getting young blacks to invest and become entrepreneurs and become owners, you’re getting gentrification, because outside forces with more money and connections to these Democrats are able to come in and get this money a lot faster than the black people that it was actually intended to help,” he added.

At the roundtable, Co-Chairman of the Urban Revitalization Coalition Kareem Lanier, called Trump’s record “nothing short of historic for black America,” and listed a number of points, including the undoing of the 1994 crime bill.

“We were getting locked up at unprecedented rates,” Lanier said. “You undid the 1994 crime bill, and we are forever thankful for that.”

“Sleepy Joe Biden’s 1994 Crime Bill was a total disaster. It was mass incarceration for Black people, many of them innocent,” the president tweeted. “I did Criminal Justice Reform, something Obama & Biden didn’t even try to do – & couldn’t do even if they did try. Biden can never escape his Crime Bill!”

“My Admin has done more for the Black community than any President since Abraham Lincoln. Passed Opportunity Zones with @SenatorTimScott, guaranteed funding for HBCU’s, School Choice, passed Criminal Justice Reform, lowest Black unemployment, poverty and crime rates in history,” Trump wrote in a tweet on June 2.

The White House is today expected to announce policing reform through an executie order.