Home / News / Politics & Policy / Poll: Only 7 percent of Americans think illegal immigration is not a problem 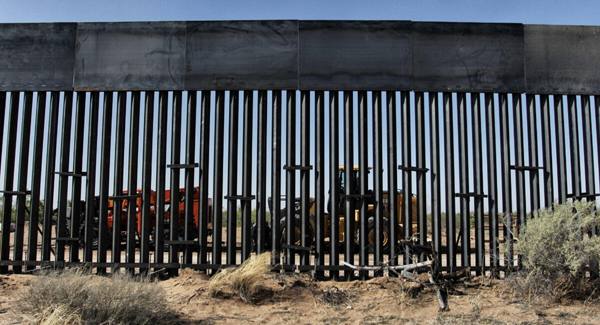 U.S. workers are pictured in April during construction of parts of the border wall by order of President Donald Trump on the border between Ciudad Juarez, Mexico, Santa Teresa, New Mexico. (Herika Martinez / AFP / Getty Images)

Poll: Only 7 percent of Americans think illegal immigration is not a problem

If you listen to the establishment media, one narrative becomes painfully clear: Enforcing the border is evil, illegal immigration is absolutely great and you’re a terrible person if you say otherwise.

The American people didn’t get the memo. While the left continues to pretend that President Donald Trump is an extremist for sounding the alarm on unrestricted immigration, it turns out that the vast majority of citizens agree with him.

According to an Economist/YouGov survey, a jaw-dropping 93 percent of Americans believe that illegal immigration is a problem.

“A wide-ranging Economist/YouGov survey gauged the level of concern Americans have on the issue to find that only 7 percent of the overall public say illegal immigration is ‘not a problem’; 2 percent of Republicans, 7 percent of independents and even 12 percent of Democrats agree with the statement,” The Washington Times reported.

There are differences in how serious people believe the immigration problem is, but those who shrug off illegal immigration are few and far between.

“40 percent of Americans overall say illegal immigration in the U.S. is a ‘very serious problem’; 73 percent of Republicans, 38 percent of independents and 15 percent of Democrats agree,” The Times explained.

“22 percent overall say illegal immigration is a ‘somewhat serious problem’; 19 percent of Republicans, 21 percent of independents and 26 percent of Democrats agree,” the paper summarized. Another 24 percent of Americans said that it was a “minor problem.”

At the same time, the Economist/YouGov survey revealed some inconvenient results for liberals.

When respondents were asked if they trusted Republicans or Democrats to deal with border security, a higher percentage — 31 percent — said “Republicans.” Meanwhile, 62 percent thought Congress should compromise with the president to end the government shutdown.

While it’s clear that Trump is receiving a lot of blame for his role in the shutdown, the poll also showed that 43 percent of respondents think Democrats should at least partially give in to the president’s calls for more border funding.

Of course, no poll should be taken as gospel.

We learned that lesson well during the 2016 presidential election when the so-called “experts” were baffled at how Trump won despite their models giving him a snowball’s chance in hell.

With that said, these results send an important message.

While talking heads in the media act as if the president stands alone in his concern over immigration and the border, he’s actually right in the middle of American public opinion.

This is what Trump does so well: He has a sixth sense about finding issues where a large number of voters agree with him, but that the left and the media cannot stand.

In many ways, that’s exactly how he won the White House. Trump understood on a basic level what most Americans were frustrated about and listened to them instead of the media narrative. He says things that are deeply unpopular with coastal elites, yet which make everyday people nod their heads in agreement.

Don’t fall for it.

It is the establishment bubble-dwellers who are out of touch, not everyday Americans. The president may be far from perfect, but at the very least he’s on the same general page as the people he was elected to serve.

Previous: Melissa Joan Hart opens up about how her faith in Christ impacts her parenting
Next: Missouri gym owner defends ‘stance for tolerance’ after demanding member stop wearing pro-Trump shirt