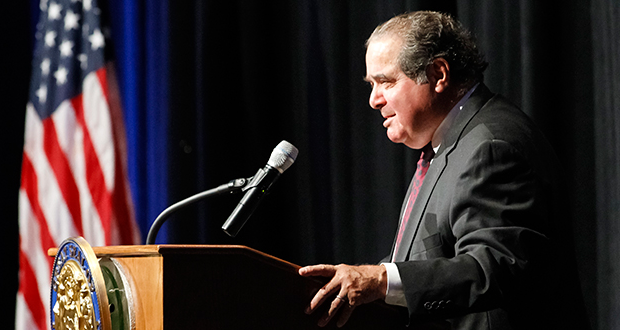 In Life and Death, Scalia changed the Supreme Court

Supreme Court Justice Antonin Scalia, the leader of the court’s conservative wing and an intellectual powerhouse, died on Feb. 13 at age 79, sending shock waves through the legal and political spheres. Scalia, who was born in Trenton and grew up in Queens, was the longest serving member of the current court. He appeared to have died from natural causes at a West Texas resort, according to reports.

“I don’t think there’s much doubt he was the dominant figure on the court,” said former Circuit Judge Michael McConnell, who had Scalia as a professor in law school and later argued at least eight cases before him at the Supreme Court. “It’s a very sad day for the country and for me personally.”

“It’s such a shock,” said Hadley Arkes, a political science professor at Amherst College and a friend of Scalia’s.

For this court term alone, Scalia’s death will have massive implications for the outcome of cases concerning religious liberty and abortion. And it comes in the midst of an already volcanic presidential campaign. In February, Senate Republican leadership said in a statement that the spot should remain vacant until the next president is elected, ending speculation that the Republican Senate might approve a nominee from President Barack Obama.

The last justice to die while sitting on the court was Chief Justice William Rehnquist in 2005. But Chief Justice John Roberts replaced Rehnquist on the court only three weeks after Rehnquist’s death. This vacancy is likely to remain for months, given Republican opposition to another Obama nominee.

The high court will continue to decide cases with eight justices instead of nine. If the vote on a case is tied, the lower court ruling in that case will stand, but without imposing a national precedent. The cases this term where the court has already held arguments but hasn’t issued a ruling will be decided on eight votes.

Scalia was a devout Catholic and had nine children with his wife of more than 50 years, Maureen McCarthy. He worked for President Richard Nixon’s Office of Legal Counsel. President Ronald Reagan appointed him in 1982 to the D.C. Circuit Court of Appeals, then to the Supreme Court in 1986. The Senate confirmed Scalia 98-0.

“That was a different world,” McConnell said.

Chief among Scalia’s achievements was bringing “originalism,” a commitment to the historical intent of the U.S. Constitution, into mainstream jurisprudence. That commitment led him to make some unexpected rulings for a conservative justice, notably on the side of criminal defendants.

“There’s not an area of constitutional law where he did not make an impact,” McConnell said. “That isn’t to say he prevailed in all those areas, but he contributed to thinking about them.”

Scalia’s biggest rulings affirmed the rights to bear arms, free speech, and free exercise and the separation-of-powers doctrine. He was strongly pro-life, although his free-exercise ruling in Employment Division v. Smith, which concerned the use of the drug peyote in Native American religious rituals, was troubling enough to religious freedom advocates that Congress passed the Religious Freedom Restoration Act in response.

Most Americans knew Scalia through his writing, which was clear and zesty in both opinions and dissents. In his dissent from the 2015 decision about the state healthcare exchanges, King v. Burwell, he called the majority’s arguments “pure applesauce” and “interpretive jiggery-pokery.” In a 2014 ruling on buffer zones outside abortion centers, Scalia concurred with Chief Justice Roberts’ majority decision, but called Roberts’ reasoning “feeble,” and said it was “an opinion that has something for everyone.”

“Even in dissent, he often carried the day just through force of intellect,” McConnell said.

“About the time he became a justice, arguments were much sleepier affairs,” McConnell said, adding that his students at Stanford Law School read opinions from all the justices, but they understand Scalia more “because he has such a clear position.”

Scalia hunted with his regular adversary on the court, Justice Elena Kagan. He performed in an opera with another adversary, Justice Ruth Bader Ginsburg, with whom he had a friendship over the years.

“He played no favorites,” said Alan Sears, the head of Alliance Defending Freedom (ADF), which was involved in approximately 70 cases before Scalia. “If our guy said something that didn’t make sense, he’d ask [him] as hard a question as anybody else.”

Sears recalled Scalia calling him one time to scold him for something an ADF attorney had done—not, Sears added, in a case that was before Scalia.

The implications of Scalia’s death for the court in the near future are big. First, Scalia’s absence is significant for cases in the pipeline; cases need four votes to win a Supreme Court hearing. With Kennedy as a wild card, there are now only three conservative justices on the court.

For the cases the court has already agreed to hear this term, the outcomes could be vastly different with Scalia’s absence. In March, the court will hear the first major abortion case in nine years, Whole Women’s Health v. Cole. The case addresses the legality of Texas regulations that closed many abortion centers. Kennedy was the uncertain swing vote. Now, Texas would have to win over one of the liberal justices to win the case. Texas won at the circuit level, so that ruling would stand in a tie-vote scenario, but other state regulations would be vulnerable.

Two other major cases now have uncertain outcomes. One is the challenge by religious nonprofit organizations, notably Little Sisters of the Poor, to Obamacare’s contraceptive and abortifacient mandate. A tie vote would have bad implications for the nonprofits, because every one of the consolidated cases before the court lost at the circuit level. This spring, the court is hearing another major religious liberty case, Trinity Lutheran Church v. Pauley, that could determine the future of state aid to religious institutions. The church in that case also lost at the circuit level.

Sears said Scalia’s loss leaves his team, involved in both the contraceptive mandate cases and the Trinity Lutheran case, with “a big question mark.”