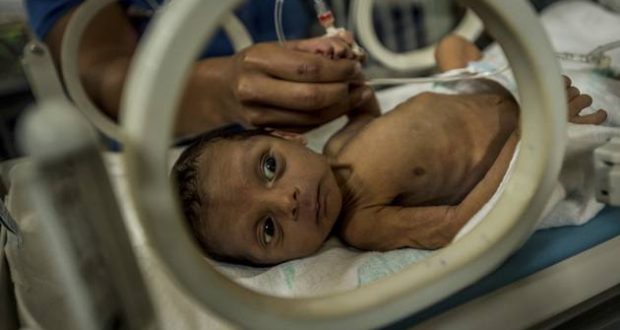 Society has crumbled in Venezuela with the failures of socialism causing widespread death.

Sick kids are the first victims of Venezuela’s socialist economy shattering the nation’s health care system and the situation in the nation’s hospitals is heartbreaking.

Families of patients dig through neighborhood garbage to find food to bring to the hospital for their loved one to eat. Medicine is virtually nonexistent.

They are now laying low as the system they praised is publicly killing children through its failures.

At San Cristobal hospital in Tachira State, only emergency cases are being admitted, and people have to buy their own medicines, bandages, and gloves.

Some patients are forced to wait in stairwells for treatment that is not coming. One patient, Gloria, needs a metal pin for her leg but could wait up to three months.

Because of a shortage of nurses, many patients in the hospital are being cared for by their relatives.

Many doctors and nurses have left the hospital because they were unable to survive on the minimum wage they were getting, and those left are working for almost nothing.

Margaret Gamboa, a student doctor, says, “Everything here is so sad. I cannot help them, because they need help, there is nobody here.”

The hospital has been left almost bankrupt by the worsening economic situation in Venezuela, and parts have had to be boarded up due to the lack of supplies.

One 7-year-old girl lies on a bed, suffering from a brain tumor.  There is no cancer treatment available in the country, and she is being cared for in her hospital bed by her mother Emyuri Fuentes, who says, tearfully, “Because she’s my daughter I have to support her and do everything I can to help her. We’ve been here for two months.”

One boy needs antibiotics for a serious bowel problem, but they simply aren’t available. His father describes the situation as “a nightmare.”

It is not known how many thousands of children have died in the nation’s hospitals waiting for basic care. Most medical facilities have suspended meals and cleaning and observers say the conditions are disgusting.

Venezuela’s socialism crisis is being exacerbated by a regime that refuses to leave power, having nominal support from the military. It is estimated that millions of citizens have fled to neighboring countries in search for food.

Previous: Native tribes to get more funding to address public safety
Next: David Crowder not your typical Christian musician