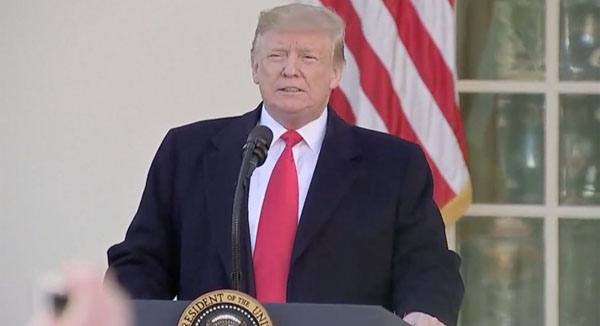 President Donald Trump has announced a short-term deal to reopen the government for three weeks while negotiations continue over the president’s demands for money to build his long-promised wall at the U.S.-Mexico border.

Trump thanked federal workers who “have shown such extraordinary devotion” throughout the ordeal. Trump said many workers did not complain and he said some even encouraged him to keep going to fight for border security.

He said federal workers will receive back-pay as soon as possible.

“We can put country before party, we can show all Americans all around the world that both parties are united at protecting our people. Many disagree, but I really feel working with Democrats and Republicans we can make a truly great and secure deal work for everyone,” he said.

Trump said walls do work, and he’s not giving up his push for a steel, see-through border fence. “Our proposed structures will be in predetermined high-risk locations,” Trump said, conceding the US doesn’t need the entire border to have a wall since some areas already have natural barriers to deter human traffickers, drug smugglers, and other security threats.

The president said if he doesn’t get a fair border deal from Congress after three weeks of negotiation, then the government will shut down again, or he will end up declaring a national state of emergency to allow him to protect America’s southern border.

“We really have no choice but to build a powerful wall or steel barrier. If we don’t get a fair deal from Congress, the government will either shut down again on February 15th or I will use the powers afforded to me under the Constitution of the United States to address this emergency. We will have great security,” he said.

The burst of movement came as LaGuardia Airport in New York and Newark Liberty International Airport in New Jersey were both experiencing at least 90-minute delays in takeoffs Friday.

Previous: Could seized drug kingpin money be used for wall?
Next: Kansas dog disappears, brings back a goat and extra dog