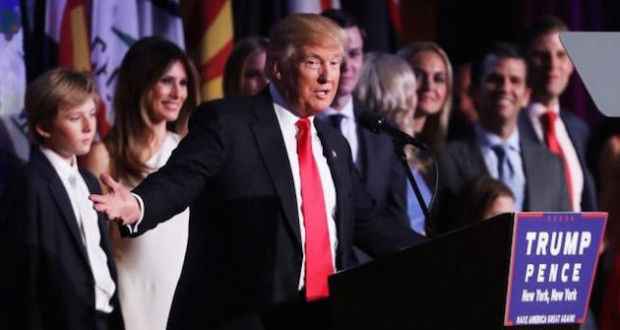 In a stunning rebuke of polls and pundits, business mogul and reality television star Donald J. Trump has won the presidency of the United States.

Despite predictions that Democrat Hillary Clinton held an Electoral College advantage heading into Election Day, the Republican nominee swept a bevy of key swing states and picked off Wisconsin and Pennsylvania to prevail with 306 electoral votes assuming Michigan will be called in his favor as is likely. That electoral margin is higher than that of George Bush in 2000 and 2004 or John F. Kennedy.

Clinton was mum on Tuesday night, perhaps holding some thread of hope that two decades spent in the halls of government power hadn’t finished suddenly with a thud. But by the time Trump took the stage in front of a euphoric crowd in New York City, Clinton had called him to concede.

Trump’s triumph was an emphatic exclamation point at the end of nearly 600 days of a brutal presidential campaign that divided family, friends, and countrymen, and upended every notion of a traditional political campaign.

Among the groups rallying around Trump at the end: white evangelicals. Exit polls showed Trump carried 81 percent of white evangelicals compared to 16 percent for Clinton. If those polls are correct, it’s the widest margin for a presidential candidate among evangelical voters since 2004.

There has been debate in the past on how pollsters define “evangelical.” In this case, it appears they once again allowed voters simply to self-identify as evangelicals or say they’d been born again. It’s unclear if pollsters asked any questions about church attendance or other signs of Christian commitment.

Still, it’s likely that plenty of true evangelicals joined the Trump constituency, whether reluctantly or enthusiastically. It’s an issue that has deeply divided many evangelicals grappling with whether they should support a candidate with a deeply compromised moral character. Even as Trump considers how to build coalitions in a fractured Republican Party, many Christians face breaches to repair among themselves.

Another group that supported Trump: rural voters in Republican counties. In Florida, Trump’s victory hinged on rural voter turnout in northern Florida, even as Clinton made strides in urban areas like Miami.

For those wondering whether the thousands of Trump supporters showing up at rallies would show up at polls, the answer appeared to be a resounding yes.

Among Trump’s many challenges now: balancing his populist vision that captured many blue-collar workers with the more traditionally conservative approach of some Republican lawmakers—including those who distanced themselves from him during his campaign.

In an acceptance speech early Wednesday morning, Trump struck a conciliatory note, even with Clinton, saying, “We owe her a major debt of gratitude to our country.” He appealed to voters who hadn’t supported him in the past: “I am reaching out to you for your guidance and help so we can work together and unify our great country.”

And he ended his speech with the kind of lofty promise he began his presidential bid with last year: “America will no longer settle for anything less than the best.”