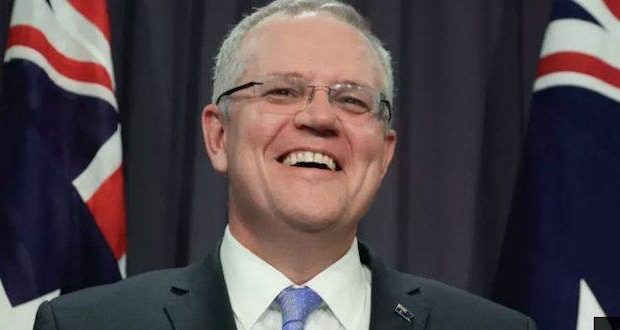 Pollsters have gotten another major election completely wrong, this time in Australia. Prime Minister Scott Morrison, a Christian evangelical who is often compared to Donald Trump in his political views, won a stunning re-election victory after the media, pollsters and the opposition had stated categorically that he would lose.

The shocking election victory by his conservative government that has left bewildered liberal voters wondering how they were taken by surprise. The results and reaction to his conservative win sound familiar to Americans.

The opposition Labor Party, meanwhile, began another bout of post-election soul searching while starting the task of finding a new leader after Bill Shorten stepped down following an emphatic defeat Saturday in a poll many had seen as guaranteed for his party.

Center-left Labor, which has governed Australia for only 38 of its 118 years as a federation, was rated an overwhelming favorite, both in opinion polls and with odds-makers, to topple the conservative Liberal-National coalition government after its six years in power.

Instead, Morrison — who became prime minister only last August when a contentious internal party vote dumped Malcolm Turnbull as its leader — swept the coalition to victory with what is likely to be an increased representation in Parliament.

The result is much the same as the last election, which delivered the government a single-seat majority in 2016. Since then, public expectations have taken a roller coaster ride based on the media’s reporting of polls which have more than often been wrong in this current election cycle.

Opinion polling has been a factor in conservative and Labor governments ousting four of their own prime ministers in the past decade, mostly recently elevating Morrison to prime minister.

Sydney University political scientist Stewart Jackson said the polls that had put Labor ahead of the government for the past two years were too consistent for too long to be credible.

“That indicates ‘herding,’ where the pollsters themselves are getting results that they don’t think are right and are adjusting them,” Jackson said. “Because statistically, polls should never come up like that.”

Martin O’Shannessy, who headed the respected Newspoll market research company in Sydney for a decade until 2015, said he was “shocked” by the government’s victory, given the polling.

“It’s not possible to tell exactly how the current polls are being conducted because they don’t have the same method statement that polls in the past have had,” O’Shannessy said.

Until Saturday, Newspoll had accurately predicted the winner of every Australian state and federal election since its inception in 1985. Australia has made voting compulsory, so pollsters’ surveys of Australians’ party preferences usually come close to the election result.

Newspolls are published every few weeks and are reported by the Australian media like a game score of the government and opposition’s popularity and achievements.

Turnbull’s administration had trailed Labor in more than 30 Newspolls before his government replaced him with Morrison as elections loomed.

O’Shannessy said Sunday, “You should never sack the prime minister on the basis of a Newspoll — ever.”

Labor lawmaker Anthony Albanese, who was defeated by Shorten in a ballot of the party leadership in 2013 and will contest for the job again, said he had expected to be in government based on polling.

“The truth is that clearly there is a major gap between what the polling was showing and what the outcome was,” Albanese said. “That is something that no doubt will be examined over coming days and weeks.”

With just over 75% of votes counted by Sunday evening, the coalition had won 73 of the 76 seats needed to form a majority government, according to calculations from the Australian Broadcasting Corp. With seven seats still undecided, the coalition was expected to make further gains by the end of counting. The government had gone into the election as a minority government, with just 73 seats.

Speaking before attending church in his electorate in southern Sydney on Sunday morning, Morrison thanked Australians for returning him to office.

“I give thanks to live in the greatest country in all the world,” he said. “Thanks again to all Australians all across the country.” Morrison is also a Christian in a secular Australian society.

The 51-year-old, who received a congratulatory phone call from President Donald Trump earlier Sunday, said he was eager to return to work on Monday to form his new government.

Like President Trump in 2016, “He crisscrossed the country with great energy, belief, and conviction. He was assured, he was confident, and he was across the detail, and he sold our economic plan to the Australian people, a plan that resonated with them,” Frydenberg said.

So high was public confidence of a Labor victory, Australian online bookmaker Sportsbet paid out 1.3 million Australian dollars ($900,000) to bettors who backed Labor two days before the vote. Sportsbet said 70% of wagers had been placed on Labor at the slender odds of $1.16 to $1.00.