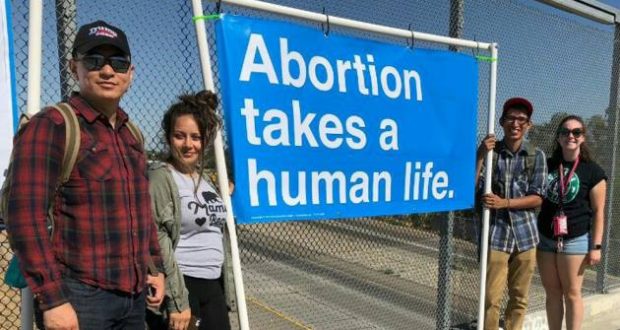 Over 50 communities across the nation will make a pro-life statement for National Pro-Life Bridges Day make a Friday, June 28. Missouri cities participating include Jefferson City, St. Charles and Springfield.

In Jefferson City, Volunteers will hold two large banners on the Main Street bridge over Highway 54, reaching commuters in both directions of traffic with the message that “Abortion takes a human life.” The group will hold their banners on the overpass from 7am to 9am.

“With all of the national controversy over abortion this year and in particular that Missouri may become the first abortion free state since Roe v Wade, we want to bring the conversation back to basics,” explained Kathy Forck, Local Leader of Columbia 40 Days for Life, who is organizing the banner display in Jefferson City on June 28. “We keep hearing about special cases and rare circumstances, but the simple truth is that every single abortion takes a human life. We want the people of Jefferson City to think about that.”

This nationwide day of public outreach is being coordinated by the Chicago-based Pro-Life Action League. Other cities include Tampa, Florida; Philadelphia, Pennsylvania; Atlanta, Georgia; St. Paul, Minnesota; San Antonio, Texas; Los Angeles, California; and the suburbs of Chicago, Boston, and Washington, DC. Organizers expects to meet or exceed the total of one million commuters reached during the inaugural Pro-Life Bridges Day last year.

For a full list of other cities or to organize an event in your community, click HERE.