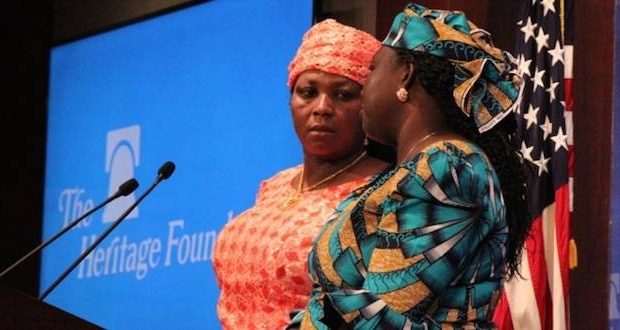 Two Nigerian women will become truth-tellers to the world in a live Facebook event Wednesday as they testify to the horrific genocide against Christians in their country. Their testimonies will be Live-streamed from 3:30 to 4:30 ET.

The brave women, Rebecca Sharibu–mother of Boko Haram “slave for life” Leah Sharibu, and Dr. Gloria Puldu, have both experienced firsthand the terrifying and increasingly murderous jihad inflicted by Boko Haram, Fulani Muslim militants and the Islamic State West African Province (ISWAP) on a growing number of innocent civilians. In their live event they’ll also report on their visits to Washington and Dallas this week which were made possible by the International Committee on Nigeria (ICON) and Save the Persecuted Christians (STPC).

Sharibu and Puldu were part of a Nigeria Crisis Delegation last week that met and updated the staff of Vice President Mike Pence on what is happening in Nigeria.

The result was that Pence summoned his Nigerian counterpart, Yesi Osinbajo, for a meeting on the issue of persecution today. Osinbajo has been criticized by his own Christian community for his inaction. The Nigeria Crisis Delegation will speak of its expectations of that meeting—in particular, the imperative need for holding accountable the persecutors and imposing real costs for their crimes against humanity.

Osinbajo is virtually the only Christian official at senior levels of the Government of Nigeria, which is now dominated almost exclusively by members of the Islamist Fulani tribe. As his remarks in New York this weekend demonstrated, he is part of the problem as he and his government are either ignoring the anti-Christian jihad or are actually complicit in it. His own tribe in Nigeria, the Yoribu, has found those misrepresentations to be so egregious that they denounced him for them. 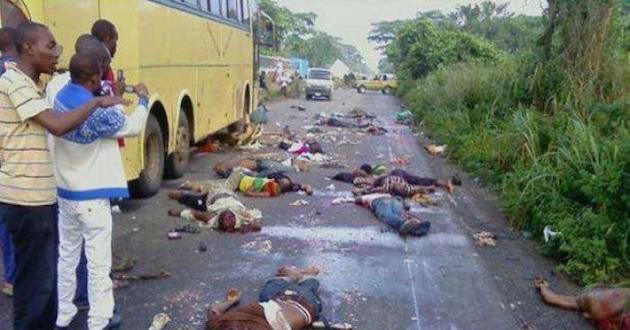 Christians were ordered off a cross-country bus, then murdered.

Among the truths about the jihad in Nigeria that will be presented will be the story of what has happened to Leah Sharibu, who was kidnapped with 109 classmates by Boko Haram in February 2018.  Leah is the only one of the surviving girls who has not been released because she refused to renounce her Christian faith.

According to Aid to the Church in Need (ACN), at least 300 million Christians face persecution. The organization released its biannual report on Religious Freedom in the World in November. That is 13 percent of the world’s 2.3 billion Christians estimated by Pew Research Center in 2015. Another report finds that 245 million Christians in the top 50 countries on Open Doors USA’s 2019 World Watch List experience high levels of persecution (i.e.: torture, rape, sex-slavery, forced conversion, murder and genocide), an increase of 14 percent from 2018. Sixty percent of those enduring persecution are children; women and girls are most violated.Release International, a UK-based human rights watchdog in operation for the past 50 years who partners with U.S.-based Voice of the Martyrs said they expect global anti-Christian persecution is set to rise ‘sharply’ in 2019.

Open Doors estimates 1 in 9 of the world’s Christians experience high levels of persecution in the top 50 countries where it is most dangerous to be a Christian, and that every month: 345 Christians are killed – often in public and without regard to gender or age; 219 Christians are abducted and imprisoned indefinitely without trial; 180 women and girls are raped, sexually assaulted or forced into marriage; and 106 churches are demolished.