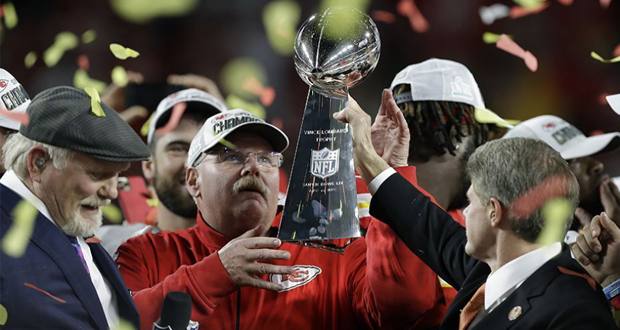 After a 50-year wait, long-suffering Chiefs fans finally got their wish: The Kansas City Chiefs are once again Super Bowl Champions.

On Sunday, Feb. 2, Groundhog Day, a day when it was warmer in Kansas City than it was in Miami, the patience of Chiefs fans finally paid off in a way that will have them wanting to re-live the day much the way Bill Murray did in the movie (a role he reprised in a Super Bowl commercial on this day).

The Chiefs had to come back from behind again, just as in their previous two playoff games, but this time the comeback came late in the 4th quarter.

Patrick Mahomes led the Chiefs to 21-straight points in the final 6:13, hitting two long passes on touchdown drives for a 31-20 victory Sunday over the San Francisco 49ers.

“We never lost faith,” Mahomes said. “That’s the biggest thing. Everybody on this team, no one had their head down. We believed in each other. That’s what we preached all year long.” 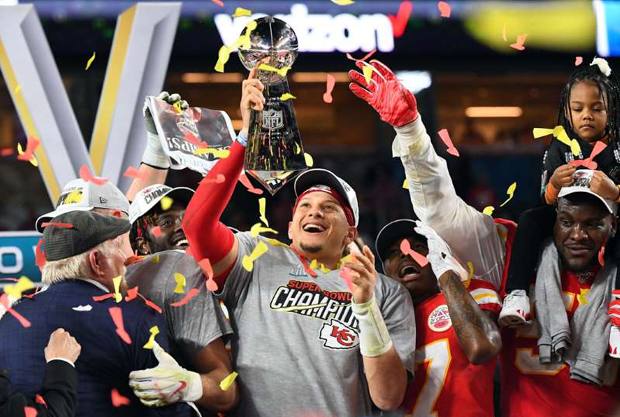 Mahomes, having a mediocre game (for him) suddenly recaptured his mojo and lifted Andy Reid and the Chiefs to a Super Bowl victory, throwing two touchdown passes late in the final quarter of the game.

The Chiefs (15-4) trailed 24-0 and 17-7 in their previous playoff games. This time, the Chiefs nearly didn’t have time for a comeback. But the vaunted 49ers defense wilted late in the game, and Mahomes brought the magic that he is famous for.

Mahomes completed passes of 44 yards to Tyreek Hill and 38 to Sammy Watkins; then the touchdowns came on short throws to Travis Kelce and Damien Williams. Andy Reid’s first NFL title was then clinched by Williams’ 38-yard TD run, sending Chiefs fans into a frenzy and chants of “Andy!” Andy!”

The big pass to Hill was the turning point. A pressured Mahomes uncorked a pass that traveled 57 yards through the air, which Hill caught on the 49ers’ 22-yard-line. That set up the touchdown and began the rally.

Though the 49ers defense and running game got most of the pre-game hype, it was the Chief’s defense and running game that ruled the day. While the Chiefs held the 49ers to 86 rushing yards, Damien Williams had 17 carries for 104 yards and a touchdown. He added four catches for 29 yards and a touchdown, and is the first player EVER with 100+ rush yards, plus a rushing and receiving TD in a Super Bowl.

Some thought Williams deserved to be the game MVP, but it was Mahomes who was named the MVP after he had 286 passing yards, two touchdowns and two interceptions, along with 29 rushing yards and a touchdown.

After the game, the humble but much-loved Reid talked about the team and the organization as a whole.

“This is what it’s all about,” Reid said. “What a great team, great coaches. Appreciate every bit of it.”

Reid then said, “I’m gonna go get the biggest cheeseburger you’ve ever seen….it might be a double”

Mahomes is now the youngest player in NFL history to win an MVP award and a Super Bowl. He also was very humble in his post-game interview, as always.

“I just try to go out there be the best person I can be every single day,” he remarked after the game. “I enjoyed most of all the brotherhood a team builds…just to be here with theses guys and winning the Super Bowl, it’s just amazing.

Kansas City, an original AFL franchise, won Super Bowl IV, the final one before the merger, beating the Vikings in 1970.

The late Chiefs owner and founder Lamar Hunt is credited with coming up with the name Super Bowl.

Now the Hunt family has the Vince Lombardi Trophy, along with the Lamar Hunt Trophy earned with the AFC crown.

“It’s a beautiful trophy,” Chiefs CEO Clark Hunt said. “I’m so happy for our players, coaches and fans. And especially Andy Reid. Nobody deserves this trophy more than Andy Reid.” 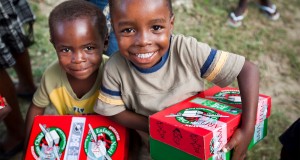