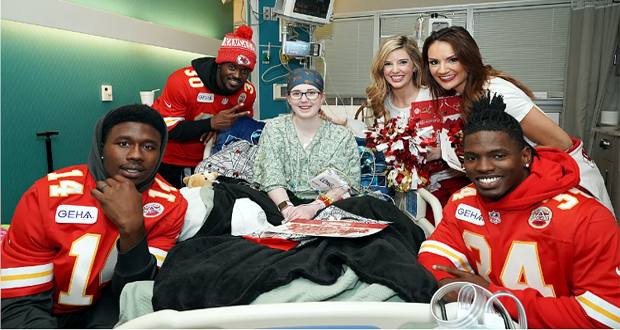 The three Chiefs players made their way down the hallway, a cart loaded with toys and hats in tow.

Spending weeks in the hospital can be heartbreakingly hard on a child, but for dozens of kids at The University of Kansas Health System on Tuesday, this particular afternoon was one to remember.

“We’re just here to check up on the kids. As athletes, it’s not just about football, it’s about giving back and using this platform to inspire others,” said wide receiver Sammy Watkins. “It works both ways, too. They lift me up with I come here.”

Watkins was joined by two of his Kansas City Chiefs’ teammates – tailbacks Darwin Thompson and Elijah McGuire – on the visit, which led the players through the pediatric wing of the hospital. The trio of Chiefs players took photos, signed autographs and – most importantly – provided hope to every child they met.

“The kids get so excited. These players are creating great memories for these families. We can think back on this and talk to them about it later on,” said Andrea Kennedy, Child Life Specialist at the hospital. “It’s nice to see smiles on their faces when they really haven’t been smiling much.”

“Just to see them crack a smile is a blessing,” Watkins added. “For us to have an impact on them and to have them laughing, just lifting them up, is special. If I can help a kid feel better when they’re feeling bad, I’m going to be there for them.”

The visit marked the Chiefs’ second collaboration with The University of Kansas Health System in just the last week.

Prior to hosting the Oakland Raiders at Arrowhead Stadium on Sunday, the Chiefs honored Sophie Shaw – a kicker on the football team at nearby Blue Valley Northwest – as the Coca-Cola Coin Toss Captain during pre-game festivities. Shaw, who was recently treated at The University of Kansas Health System for a labral tear in her shoulder, returned to action just five months after initially suffering the injury.

“She had an arthroscopic shoulder labral repair, which is a common surgery that we do for shoulder dislocations,” said Dr. Scott Mullen at The University of Kansas Health System. “She’s done fantastic since the beginning and worked really hard through the rehab. She’s done great and is back doing what she loves to do without any issues.”

Shaw, who played the entirety of this past football season without any limitations, credits the care she received both during surgery and the rehab that followed when reflecting on her return to the field.

“It was an amazing experience. They walked me through everything and told me exactly what was going to happen,” Shaw said. “I just felt super comfortable there.”

Shaw’s resiliency and spirit throughout the process led to an afternoon to remember on Sunday, as both instances – from Shaw’s experience on the field to the hospital visit on Tuesday – demonstrated the special relationship shared between the Chiefs and University of Kansas Health System.