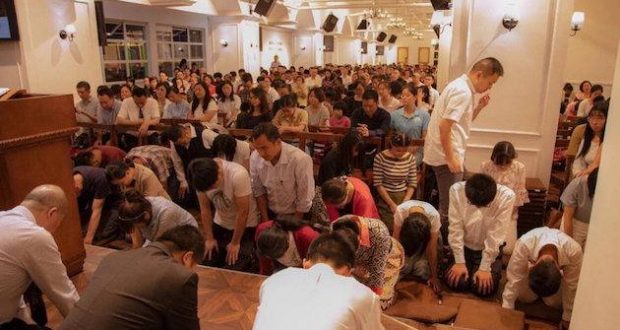 China is tightening its grip on the country’s Christians through repeated efforts to persecute and silence the Church including arrests and imprisonment.

The latest example happened Sunday when Communist party officials detained Pastor Wang Yi of the Early Rain Covenant Church and more than 100 members, according to The Wall Street Journal.

“His home was ransacked. It was a mess,” Zhang said. “The police said our church is an illegal organization and we cannot attend any more gatherings from now on.”

Pastor Wang is an outspoken critic of President Xi Jinping and his new regulations, which require all churches to be registered to the state.

He organized a petition several months ago that condemned the government for targeting unregistered churches. The petition gained more than 400 signatures from pastors around the country.

While most evangelical churches operate underground to avoid the government, Early Rain openly practices Christianity and evangelizes on the streets.

Sunday’s raid may have been triggered by a 7,300 words manifesto titled “Meditations on the Religious War,” which Pastor Wang wrote and posted on social media.

In it, he condemns China’s Communist Party and urges Christians to perform acts of civil disobedience.

Pastor Wang criticized the government for forcing its citizens to engage in “Caesar worship” by treating President Xi Jinping like a god.

He wrote that ideology “is morally incompatible with the Christian faith and all those who uphold freedom of the mind and thought.”

This is not the first time Early Rain church has been raided, but one church elder says Sunday’s raid was “unusual.”

“This round of crackdown is unusual as it seems that the authorities want to close the church down for good. Our social media channel accounts such as WeChat were not closed in previous rounds and they have taken a large number of our members into custody this time. The scale was unprecedented,” Li Yingqiang, one of the church elders, told The South China Morning Post

Li said the church will continue to worship God despite the persecution.

“Even if we are down to our last five, worship and gatherings will still go on because our faith is real,” the elder explained.

“Persecution is a price worth paying for the Lord. We would rather live through it than to hide our faith and we hope more Chinese churches will speak up and stand with us.”