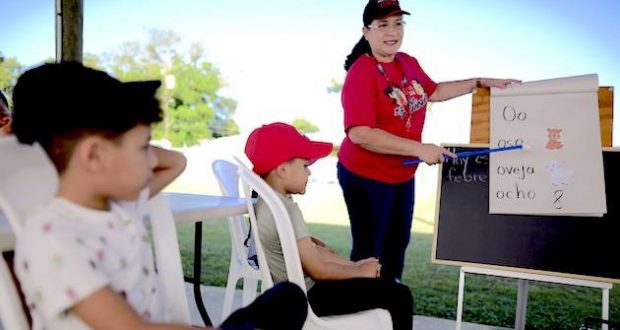 When the most recent earthquakes started rumbling in Puerto Rico in December of 2019, it unnerved residents who were still anxious from Hurricane María, which pummeled the island two and a half years ago.

Then, when the 6.4 earthquake struck on January 7, 2020, people were visibly shaken.

The entire island’s day-to-day operations were severely affected. From food to electricity to water, many basic services are difficult to come by on the Island. But it’s the kids that are most affected as Puerto Rico’s school system took a particularly hard hit. 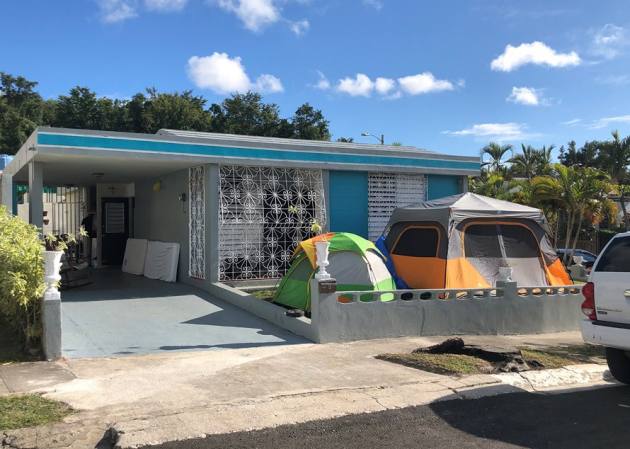 In the weeks since a January 7 earthquake rocked Puerto Rico, significant aftershocks have continued rattling the island. Many homeowners are still choosing to live in tents outside of their homes rather than sleep inside.     Photo by Jennifer Govea

Parents did not want to send their children back to school. They were nervous that the buildings were not safe since local officials had not been able to exhaustively inspect their structural integrity.

As a result, children have been out of school for over a month.

While teachers, parents and students wait for the schools to be examined and reopened, principal Carmen Rodríguez, no relation to Gilberto, decided to take action by teaching wherever she could. Enter the idea of “pop-up classrooms.”

Rodríguez’s house in Ponce was damaged, so she began sleeping in Las Delicias Park down the street. That’s where she decided she didn’t need to be inside a school to teach her students.

People drove by the park and saw her outdoor classes. Word also spread through social media, and student attendance boomed. What started out with a few students from one school learning under a tree blossomed into 338 students from a dozen area schools.

With little resources and support, Rodríguez had been desperate for help of all kinds. There were only nine volunteer teachers and a handful of parents to volunteer with the pop-up classrooms. So, she was grateful when Send Relief volunteers from Kentucky and Texas showed up the week of January 21 to play with the children in between their structured activities. 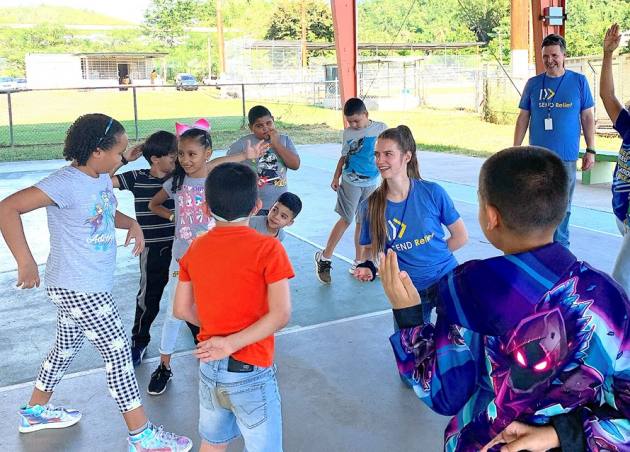 Volunteers with Send Relief play games with a group of children who have been participating in “pop up classrooms” in Puerto Rico.

Jane Hopper, a Send Relief volunteer from Kentucky, saw firsthand how the presence of volunteers in the pop-up classrooms aided teachers.

“We were able to love on the children and distract them from the stress of the situation,” Hopper said.

On a balmy Thursday afternoon with temperatures in the low 80s, Alexis Rodríguez, no relation to Gilberto or Carmen, sat under one of three pop-up canopies designed to shield fourth grade students from the sun — among them, his 9-year-old son, Haziel. 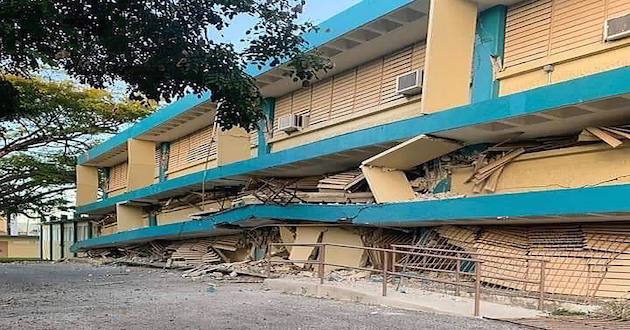 Rodríguez said that Send Relief volunteers were the first ones to arrive on the scene to help, and they had a big impact on the kids as they dealt with the stress of their situation. Parent Yelitza González agreed.

“Playing with the children allowed them to relax during such a tense time when everyone is nervous,” said González, a single mother of four who volunteers at the school. “If this temporary school wasn’t here, I don’t know what I’d do.

“I know that I wouldn’t be able to continue my college studies because I don’t want to be far away from the children if we do have more tremors. But here in the park, I know they’re in good hands, having a good time, all while learning something. It’s like therapy for them.”

Germán Figueroa is one of the fifth graders at the school in the park. When he saw a photo of the blue-T-shirt-clad Send Relief volunteers who helped earlier last month, his face lit up.

“They’re my friends,” he said. “The first one that I met was Scott.” 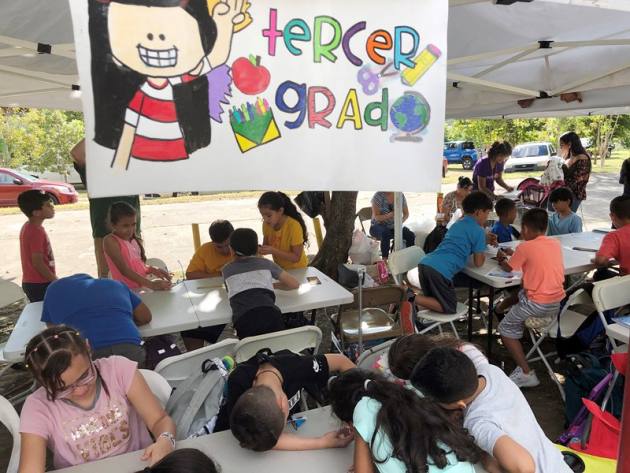 After the recent spate of earthquakes hit Puerto Rico, schools were unable to open due to concerns about the structural integrity. One teacher started teaching classes outdoors, and eventually, hundreds of kids started showing up. A volunteer team with Send Relief came alongside the “pop up classrooms” and played games with the kids during breaks.      Photo by Jennifer Govea

Figueroa and Scott Upchurch became friends while playing VBS-style games that the group from First Baptist Church (FBC) in Monticello, Ky., and Church at the Cross in Grapevine, Texas, organized during the three days they were at the park.

The volunteers prayer-walked the area surrounding the church, gave out emergency supplies and prayed with many of the neighbors.

Deby Coffey, a Send Relief volunteer from FBC Monticello reflected on the impact her church’s mission team had in Puerto Rico and how God’s hand was evident, even in the purchasing of airline tickets.

“When the team leader booked our flight, for some reason we had three checked bags per ticket,” Coffey said. “At the time he booked the flight, there was no need for us to have the extra bags. He even tried to decrease the number of checked bags, but the price per ticket increased. Little did we know that God had a plan for us.”

Coffey’s team had arranged to go to the island before the earthquakes hit. In the aftermath of the tragedy, there was a need for supplies, and the extra space for checked bags meant they would be able to bring those resources with them.

Within a week, her church and others in the Monticello community donated enough to fill all of their extra duffel bags with supplies that could be divided up into backpacks donated to Send Relief.

“We didn’t know that Send Relief had boxes of empty backpacks sent by another group which could be used to distribute the supplies to earthquake victims,” she said. “God brought it all together!”

To learn more about how to donate and serve the people of Puerto Rico, visit SendRelief.org.