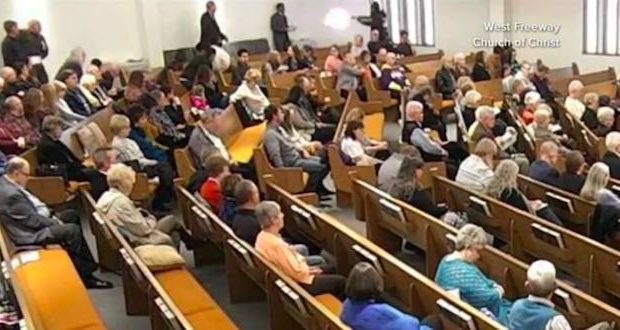 Authorities,  state officials and church leaders are praising the volunteer church security team who helped stop a mass shooting and noted that a state law passed earlier this year made clear that gun owners with conceal carry licenses could carry firearms in churches.

Britt Farmer, senior pastor at West Freeway Church of Christ, praised laws that let churchgoers carry guns. “We lost two great men today, but it could have been a lot worse. I’m thankful our government has allowed us the opportunity to protect ourselves,” he said at the press conference.

Texas Lt. Gov. Dan Patrick noted that Senate Bill 535 was signed by Texas Gov. Greg Abbott earlier this year. The bill struck language from state law that barred licensed holders from carrying handguns into churches, synagogues, or other places of religious worship. Abbott signed another law in 2017 exempting churches from state fees that private institutions must pay to form their own security forces.

READ: Violent video games under scrutiny after string of shooting

“Our hearts are heavy today as we pray for the victims of this tragic shooting, their families, this church and this community. But we are also grateful and thankful for the unparalleled heroism of two parishioners who were determined to protect the people in their church community,” Patrick said during a press conference on Dec. 29 hours after the shooting at the West Freeway Church of Christ in the Fort Worth area.

“Because of the quick action of these two men, this evil event was over in six seconds. There is no way to know how many lives they saved. The brave officers from the White Settlement Police Department were on the scene in less than two minutes, but these men who had volunteered for the church security team had already secured their church.”

Jeff Williams, director of the state Department of Public Safety, said the men who stopped the shooter saved everyone else.

“The citizens who were inside that church undoubtedly saved 242 other parishioners, and that might get swept aside,” he said at the press conference. “It was miraculous. The true heroes in all this are the people who were sitting in those pews today and responded, the immediate responders … it was truly heroic.”

A livestream video captured the shooting. The footage shows the gunman get up from a pew near the back of the room and walk up to a man who was standing in the corner. The gunman suddenly reaches into his jacket, pulls out a shotgun, and fires twice, striking two other men.

A third man is seen pulling out a handgun and shooting the gunman just six seconds after the man pulled out the shotgun.

At least five others were seen brandishing guns and pointing them at the gunman.

The bulk of the worshippers ducked behind pews while others fled the room.

A number of people screamed as the gunman fell to the ground.

The man who shot the gunman kicked away the shotgun before picking it up.

Two people were killed in the shooting in addition to the gunman, who has not been identified.

Previous: Promise Keepers forms advisory board for next summer’s stadium event in Dallas
Next: After losing hospital, rural town realizes they don’t need one