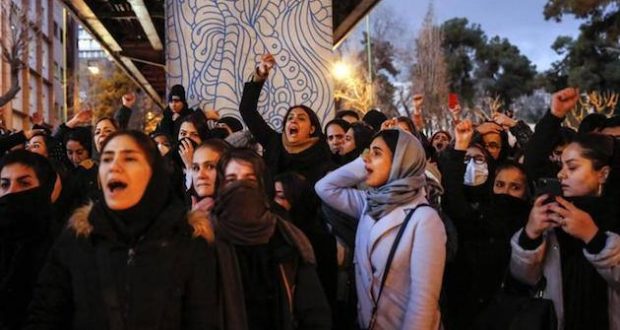 Growing protests inside Iran have the Islamic regime stepping up pressure against Christians. The fear of Iranian officials, say experts, is that calls for democracy will lead to the expansion of the Christian faith.

Pressure on the Iranian government, brought upon it by the resumption of sanctions by the Trump administration, could create more protests for freedom.

Mike Ansari of Heart4Iran, a network of more than 100 ministries that reaches Christians of Iran through media and broadcasting said the government is  keeping a close eye on the activities of Christians and also Muslims who have made contacted with the Herat4Iran ministry.

He said just this week, Iranians phoned a Heart4Iran call center and said Iranian intelligence agents contacted them saying they had no right contacting  “infidels” outside of Iran.

“So, it shows that the Iranian government is very, very frustrated…they are arresting people, they are putting God’s fear in them,” Ansari explained.

Ansari said despite the risk of government harassment or arrest, hundreds of Muslims living inside Iran continue to call Heart4Iran daily because they want to hear more about Jesus.

“They want to find out more about the Prince of Peace. I believe the majority of  Iranians are fed up with the anger, the frustration that they see of (how) their god is being portrayed and they are naturally gravitating to the message of love which is at the core of Christianity,” he said.

Because Iran is an Islamic Republic, government leaders are angered when Muslims leave Islam for Christianity. Iran has applied the death sentence to cases of apostasy – Muslims who have left Islam for other faiths.

And in 2010, the government launched a special task force to conduct raids on underground house churches, arresting pastors and church members.

But Iranian government persecution of Christians has not stopped the faith from spreading rapidly across the country. Today, Christian groups estimate that more than a million Iranians have embraced Christianity.

Several Iranian government officials are expressing alarm about the large number of Muslims who have left the Islamic faith for Christianity. Last May, Iranian Intelligence Minister Mahmoud Alavi reportedly complained publicly that it is “happening right before our eyes.”

Fifty percent of the Iranian population is under 30 years of age and many young Iranians learn about life and pop culture in the West by following social media.

“And they’re asking themselves the question, ‘why is there such a division between their culture and their society and the one in the West?’ Do I really want to be identified with an ideology and the lifestyle that Iranian Muslims have set out for me?'” Ansari explained.

And surprisingly, Iranian men are not the ones leading this rapidly expanding move of Christianity in the nation.

“The women of Iran are courageous, they are bold and strong, very much at the forefront of the movement of the growth of Christianity in Iran. They are not afraid,” Ansari explained.

And Ansari said despite sophisticated Herat4Iran television broadcasts and missionaries going to Iran to share the Good News of Jesus, many have found Jesus working way ahead of them through dreams and visions.

“People call us and say, ‘I just saw your program on Mohabat TV and I actually had a dream about this, or I had a vision about this, or my mother told me she had a dream about it. Can you tell me more about the man in white, who is this Jesus, who is this Prince of Peace? You mean that God is not a vengeful, angry God who is going to smite me and he loves me with all my challenges and inadequacies?’  And we say yes, that is the grace of God.”

Ansari also said many young Iranians are returning to traditional Christianity which was practiced in Iran for centuries before it was eradicated by Islam.

“I have Kurdish people who are saying in their villages their grandparents are putting the cross on their bread and they are asking, ‘grandma why do you put the cross on your bread?’ And they say because ‘our ancestors used to be Christians and they put the cross there to bless it,’  Ansari explained.

“So, we’re seeing a surge of Iranian youth going back to this reemergence of Christianity and Christian identity that was lost in that region.”