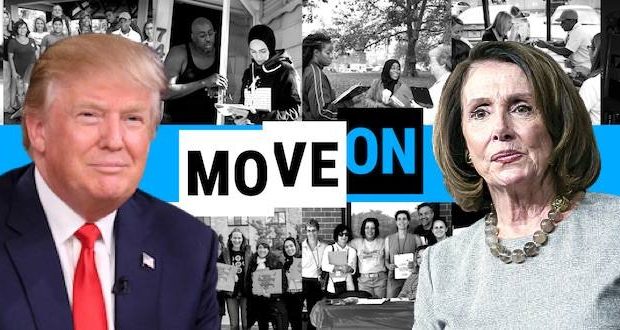 Democrats partner with leftist groups to push impeachment in media

Congressional Democrats are actively working with radical, left-wing groups such as MoveOn.org to promote House Speaker Nancy Pelosi’s unilateral push to impeach President Donald Trump.  Pelosi this week announced her decision to hold the hearings without Republicans present at the closed-door partisan sessions. One Republican was forcibly removed after forcing his way into one of the meetings.

Pelosi’s push for impeachment is not over any of the now debunked claims of Russian collusion that took hundreds of millions to investigate and the attention of the nation for three years. The current push is over a July telephone conversation he had with Ukrainian President Volodymyr Zelensky.

Democrats are pushing the claim, a claim not based on evidence, that the President tried to strong-arm Zelensky by threatening to withhold military aid to Ukraine unless that country opened an investigation into Democratic presidential candidate and former Vice President Joe Biden, and his son, Hunter Biden.

Trump acted within the bounds of a treaty signed between former President Bill Clinton and Ukraine in 1999 that allowed a U.S. President initiate an investigation to help root out corruption.

A transcript of the call showed only that Trump requested such an investigation, not that he insisted on a quid pro quo, yet the impeachment process, clouded in secrecy, rolls on. Pelosi has so far bucked precedent from the three previous presidential impeachment sagas by refusing to ask the U.S. House of Representatives to vote to open a formal impeachment inquiry. This refusal has caused Republicans and others to claim the opaque impeachment process now underway lacks political legitimacy.

The younger Biden secured a lucrative job with Ukraine energy company Burisma Holdings despite having no background in the energy field. Ukrainian authorities are now investigating Burisma and, according to recent news reports, began their probe months before Trump spoke to Zelensky.

Republicans claim that Burisma giving Hunter Biden the job while his father served as U.S. vice president was an attempt to purchase influence with the Obama administration.

Activists and partisans are anxious to move forward with the impeachment and possible ouster of Trump from office and more than 100 such activists participated in a teleconference Oct. 9, aimed at “selling” the voting public on impeachment, according to Politico. The news comes as polls show rising support for impeachment.

Although powerful Democrats in Washington have been ignoring activist calls to impeach Trump for years, many jumped on the bandwagon when Pelosi announced her impeachment effort in September. Since then, an “organizational hub has sprouted in Washington, commissioning polling, sponsoring ads, and trying to guide the energy in the party toward a message and result the public will support, while counteracting a blistering, expensive anti-impeachment campaign from Trump and the Republican National Committee,” Politico reported.

Long before Pelosi made her announcement, Democratic presidential candidate and billionaire Tom Steyer had been running his own pro-impeachment campaign called Need To Impeach, for months, complete with coordinated media outreach and television ads.

MoveOn.org and Indivisible are two of the larger Democratic-ally groups that have signed onto the impeachment effort. Frequent cable TV guest Zac Petkanas, former director of rapid response for Hillary Clinton’s campaign, is also participating, according to the report.

“It’s going to be very intense,” Meagan Hatcher-Mays of Indivisible, a group known for drafting manuals explaining how to disrupt Republican lawmakers’ town hall meetings, was quoted as saying.

“It’s all hands on deck for grassroots folks and everybody in D.C.”

“We need to keep this as simple as possible,” David Sievers, campaign director at MoveOn reportedly said. “It’s worse than Watergate.”

“As much as activists can, [they need to] keep it simple and say, ‘Are we OK with that? If not, there’s only one thing Congress can do in response to that: impeachment.’”

On the conference call, Democratic pollster Jeremy Rosner and Petkanas reportedly said few voters are interested in the allegation that Trump had violated campaign finance law, but that they do seem troubled that he “thinks he is above the law.”

Left-leaning groups are now running their own ad campaigns making the case for impeachment. Steyer’s group began spending more than $3 million focused on Senate Republicans. One ad is directed at a Republican senator from Maine, saying: “Tell Susan Collins to put country over party.”

Another group called ACRONYM is conducting a $1 million online campaign in five battleground states that Democrats need to keep the House.

Trump’s advertising is “largely focused on keeping his base fired up and on fundraising,” Shannon Kowalczyk, chief marketing officer at ACRONYM, reportedly said. “He’s not spending as much time talking to that broader swath of American people who may have questions about this process and may have not made up.”

Previous: Seasonal increase in vehicle-deer crashes: what you can do
Next: Judge blocks Obama rule that forced doctors to perform abortions