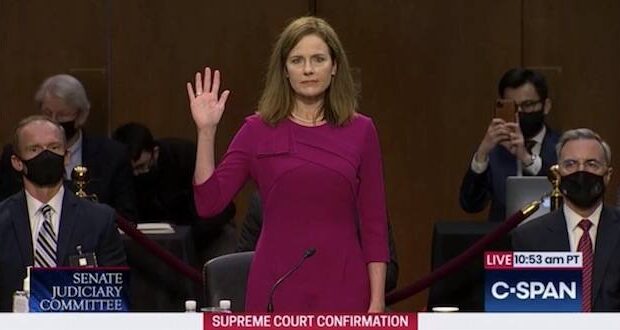 In an attempt to block the process, Democrat Senators will instead use a political stunt by filling their seats with life-size posters of people they claim will be hurt by Barrett on it. Instead of attending the hearing and vote, Democrats are planning speeches.

The Huffington Post first reported the boycott news today and indicated “Democrats also intend to hold two press conferences to push back on Barrett’s confirmation ― one on the Capitol steps and one on the Supreme Court steps.”

“Following four days of hearings, 51 percent of voters said the Senate should vote to confirm Barrett to the Supreme Court, up 3 percentage points from the week before and an increase of 14 points since Trump announced her nomination on Sept. 26. It’s a higher level of support than Morning Consult measured at any time during the confirmation processes for Justices Neil Gorsuch and Brett Kavanaugh — the two other jurists Trump has tapped for the high court during his presidency,” the polling firm indicated.

The Senate Judiciary Committee vote on Thursday sets up a final vote by the full Senate on Monday.

During the confirmation hearings, Judge Barrett says she doesn’t consider the Roe v. Wade decision that allowed abortion on demand a “super-precedent” that can’t be overturned.

Judge Barrett said Roe is not in same category as the Supreme Court’s 1954 Brown v. Board of Education ruling, which declared segregated public schools unconstitutional because there is still a massive debate about whether Roe is legitimate.

In comments during her confirmation process, Judge Amy Coney Barrett also confirmed she is committed to the rule of law.

In Barrett’s opening remarks on her first day of hearings she talked about the proper role of the courts, saying they are not supposed to make law and legislate from the bench. She also refused to back down to attacks from Senate Democrats on her faith, saying she strongly believes in prayer and thanked the many Americans who are prayer for her amid those attacks on her Christian faith.

“I believe in the power of prayer and it’s been uplifting that so many people have been praying for me,” Judge Barrett told members of the judicial panel.

“Nothing is more important to me, and I am so proud to have them behind me,” she added.

Before that, Judge Barrett discussed the proper role of the Supreme Court.

“Courts are not designed to solve every problem or right every wrong in our life,” she explained. “The policy decisions and value judgments of government must be made by the political branches elected by and accountable to the People. The public should not expect courts to do so, and courts should not try.”

“When I write an opinion resolving a case, I read every word from the perspective of the losing party. I ask myself how would I view the decision if one of my children was the party I was ruling against,” she went on to say. “Even though I would not like the result, would I understand that the decision was fairly reasoned and grounded in the law? That is the standard I set for myself in every case, and it is the standard I will follow as long as I am a judge on any court.”

Some Democrats are saying they will either filibuster or boycott the final Senate vote on Monday.