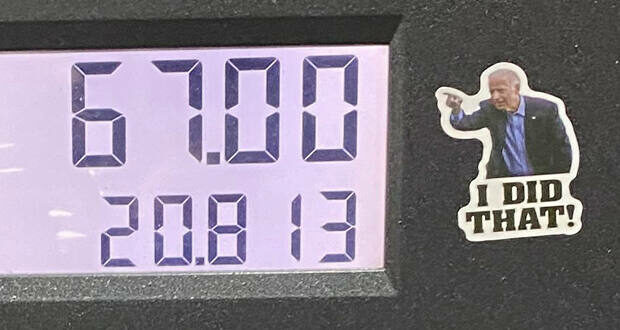 Drivers across the country have found a creative way to tell President Biden what they think of soaring gas prices. Decals of a finger-pointing Biden, with the words “I did that!” in big, bold print, have been appearing on fuel pumps across the country.

“I just know everything he’s been doing since he took office has been going downhill,” Harold Frost of New York City said. ” Bring Trump back. My car has been parked the whole week because of this. I took the train, but it’s dangerous now on the train. You gotta be careful.”

Stickers — which sell in packs of 100 for $8 on Amazon — have been found on numerous gas pumps.

“I don’t go for the Democrats,” said Vincent Williams, a black Harlem resident who could afford to put $15 worth of gas in his tank, which these days barely buys three gallons. “They make it seem like they got the backs of minority people, but in reality, they’re just in it for themselves.”

One gallon of regular unleaded gas is averaging $4.78 in Manhattan and $4.32 nationally as of Saturday, according to the American Auto Association. The stickers first started appearing last year and have gained in popularity as gas prices continue to surge. The Biden administration banned Russian oil imports in response to the country’s war on Ukraine, but some critics say he already was sabotaging gas prices with his energy policies.

Gas station managers are not fans of the stickers. “Put it on your car, put it on your house,” an Alabama attendant said. “Don’t vandalize private property.”

Javier Estrada Ovalles, who sells his own Biden stickers through his company, Automotive Anarchy, said he is benefiting from the oil shock, filling nearly 80 orders a day for the cheeky political statements.