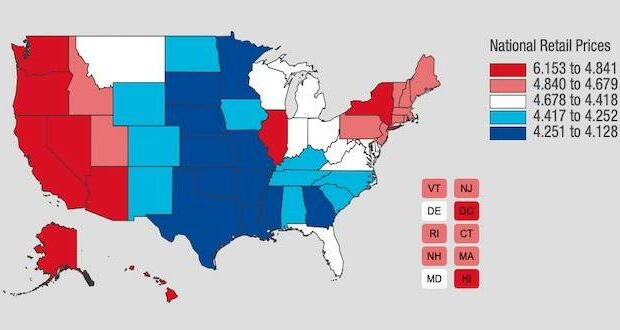 Gas up 50% from last Memorial Day

Motorists traveling over this holiday weekend are finding themselves digging a lot deeper into their wallets. This new national average gas price has reached a new record high.

“It’s going to be the highest Memorial Day in terms of gas prices that we’ve ever seen in fact, blowing out the previous record, which was $3.66 a gallon in 2014,” Patrick De Haan, head of petroleum analysis for Gasbuddy says.

And the cost of fuel isn’t just hitting road travel. The cost for airline tickets this week is 45% higher than a year ago.

Despite the price at the pump, 58 percent of Americans still plan to travel this summer.

“The numbers are kind of surprising given the fact that gas prices are at record highs,” he said. “To see more Americans hitting the road this summer compared to last year I think is a testament to the strength of the economy, the fact that basically everything has been reopened and consumers still want to get out.”

Political analysts say Americans may be enduring the pain in anticipation of the 2022 midterms. That’s when, according to polls, voters are expected to return the Congress to Republican control with historic veto-proof majorities. That could spell an end to Biden administration policies that economists say are causing the current energy crisis.

In the meantime, consumers are looking for ways to ease the pain.

Consumer saving expert Andrea Woroch said doing things such as shopping at warehouse club stores and grocery stores that have fuel reward programs can save money. Woroch said drivers also can save by paying cash and being cautious about which credit cards give rewards for buying gas.

“When you pull up to a gas station, you’re going to see that advertised per gallon price, and that is for cash-paying customers, so don’t be fooled that you’re going to get that price,” she said. “If you can carry cash, that’s going to be the best way to get the cheapest price at the moment.”

Woroch also said gas prices fluctuate daily, so a gas station that drivers are used to going to for the lowest prices may be a little higher than usual depending on the week. Therefore, searching the internet each day is the best option to find the lowest price per gallon. The small methods can make a big difference.

Previous: How much do you know about Memorial Day?
Next: Pro-life Democrat challenges her party to care for women in need