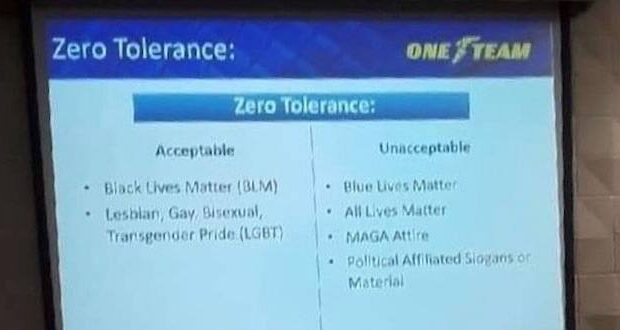 Goodyear under fire for ‘diversity’ training that disrespects police officers

Goodyear Tire and Rubber Co. is scrambling to avoid a nationwide boycott after a whistleblower released a slide from the company’s new diversity training course.

A photo of the slide that has since gone viral on social media shows information presented to employees during a diversity training that explained what’s acceptable and what isn’t acceptable as part of the company’s zero-tolerance policy.

READ: What is the doctrine of Black Lives Matter?

According to the employee who took the photo of the slide at the Topeka, Kan., plant, it was presented by a manager and came from the company’s headquarters in Akron, Ohio.

“If someone wants to wear a BLM shirt in here, then cool. I’m not going to get offended about it. But at the same time, if someone’s not going to be able to wear something that is politically based, even in the farthest stretch of the imagination, that’s discriminatory,” said the employee under the agreement of anonymity due to fears they could lose their job. “If we’re talking about equality, then it needs to be equality. If not, it’s discrimination.”

Media outlets have reached out to Goodyear about the slide. While responding, they did not answer questions when asked if the slide was part of a training from their main office.

A spokesperson for Goodyear told WIBW that the company does allow their employees to speak out against racial injustice, but asks employees to hold off on showing support for political candidates at work.

Goodyear is committed to fostering an inclusive and respectful workplace where all of our associates can do their best in a spirit of teamwork. As part of this commitment, we do allow our associates to express their support on racial injustice and other equity issues but ask that they refrain from workplace expressions, verbal or otherwise, in support of political campaigning for any candidate or political party as well as other similar forms of advocacy that fall outside the scope of equity issues.”

President Trump joined law enforcement officers and others across the nation calling for a boycott of the company, prompting the company to release a new statement.

The company has since backtracked and said the slide was not produced in their offices but has not indicated how it was disseminated to Goodyear stores across the nation.

Goodyear’s critics say the company’s explanation is not acceptable. Social media users and some cable news commentators say the company is effectively condoning left-wing views while forbidding other opinions.

“If businesses are going to deliberately enter the political realm at the behest of the wokest clientele, then everyone else will have to loudly boycott in response to establish mutually assured destruction,” Ben Shapiro, founder of the conservative news website the Daily Wire, said on Twitter.

Goodyear shares were off 3.7 percent at $9.38 in early afternoon trading on Wednesday.

Previous: Police believe they have found body of missing wife of Kansas pastor
Next: Missouri economy grows as unemployment plummets