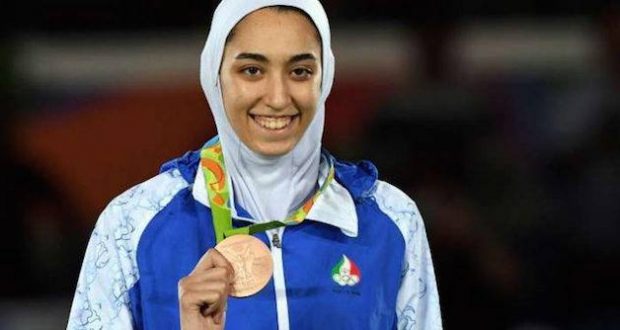 Iran’s downing of a passenger jet is having fallout in the sports world. Taekwondo fighter Kimia Alizadeh, Iran’s only female Olympic medalist, has defected. The athlete, who has rock star status in Iran,  says she is moving to Europe because she can no longer take part in the “lies and injustice” of the Iranian regime.

Alizadeh, who won a bronze medal in the 2016 Olympics, recently wrote on social media that she escaping to an undisclosed European nation.

“No one has invited me to Europe and I haven’t been given a tempting offer. But I accept the pain and hardship of homesickness because I didn’t want to be part of hypocrisy, lies, injustice and flattery,” Alizadeh wrote in an Instagram post.

She continued with a long message about how she was forced to wear hijab, silenced, and was exploited as a political tool.

Alizadeh said although she is sad to leave her country, she is proud of the Iranian people.

Iranians are in the streets this week protesting the deaths of 176 people who were killed after the Iranian military shot down a Ukrainian airliner. Most of the passengers on board were Iranian citizens.

Officials are reportedly responding to the protests by open firing on civilians and using tear gas to disperse demonstrators.

Alizadeh is not the first Iranian athlete to speak out against the Iranian government.

In December, Iran’s Chess Federation said chess champion Alireza Firouzja had decided to no longer play for Iran over its policy of banning competitors from competing against Israelis.

Say goodbye or condolences?
Hello to the oppressed people of Iran, bye to the noble people of Iran, condolences to you people always daughter Iran.
How do you know me? Just as you have seen in competitions, on TV, or in the presence of officials.
Let me now freely introduce my censorship identity.
They say the alchemy will not be anything after this. I’m going to go beyond this too and say nothing before, “I am the alchemy of my own, not my history, nor a ghahrem, nor the flagship of the Caravan of Iran.”
I was one of the millions of suppressed women in iranm that I wanted to play every year. Wherever they were asked. Whatever they said put on. Every sentence I ordered was repeated. At any time, I was confiscated. The medals were forced by hijab, and attributed to their own management and wisdom.
I didn’t care about them. We are not important هیچکداممان. Only those metal medals are important for any price that they rate, buy and take political exploitation, but at the same time for research, they say: ‘ The virtue of the woman is not to lay his feet!
I wake up in the morning, I’m waking up with unconscious feet like a fan and takes on the wall. How could I be able to build a meter of mine? In the live TV program, they asked questions that were just because of the same question.
Now I’m not saying I’ve given dishonor. Mr. Saei I’m not like you, and I’m not walking on a path that municipality before. If you imitate a part of your behavior, I could be more than you could get into wealth and power. I got back to these. I am a man and I want to stay on the circuit of humanity.
In your patriarchal and woman’s mind, you always thought that the alchemy is a woman and does not have language! My grieved soul is not fits in the polluted economic channels and the tight political lobby. I am not asking for a happy and healthy life, but in other countries.
The beautiful people and daghdar of Iran, I did not want to climb the stairs that I built on the basis of corruption and lies.
Someone has not been in Europe and opened the green garden to go. But Ateshbejan the tribulation and the hardships of the roving, because I didn’t want to sit on the foot of hypocrisy, lying, injustice and flattery. This decision is more difficult than acquiring the Olympic gold, but wherever I be the child of Iran is staying ground. I am in the back of your encouragement and I do not have another desire except for your trust in the difficult way I’ve walked.

Previous: World Evangelical Alliance equates US with Iran, gets pushback from Christians
Next: Promises Keepers announces speakers for this summer’s stadium event in Dallas