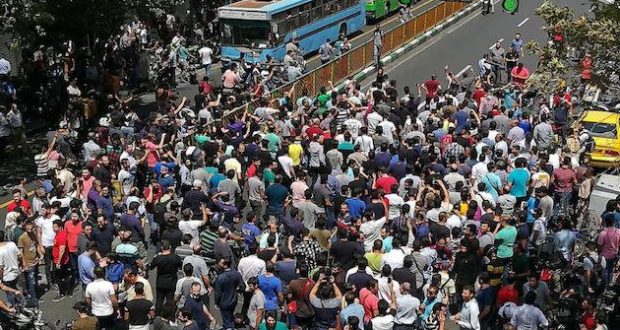 As tens of thousands of Iranians take part a second day to protest against the Islamic regime, government officials sought to accuse the United States instead of Iran’s economic woes.

“As always, America wants to break apart the power, glory of the Islamic Republic of Iran and grandeur of the system and the nation with a new method,” Rouhani claimed, as he sought to reassure Iranians growing angry by the day over the regime’s handling of the economy.

“The US cannot defeat our nation, our enemies are not able to get us to their knees,” Rouhani said, adding that Washington was waging a “psychological, economic and political war” on Iran.

Iran’s currency, the Rial, has plummetted in recent days against the US dollar prompting thousands of Iranians to protest in front of Parliament and on the streets of Tehran.

The pressure on Iran’s economy may be caused, in part, by the U.S. withdrawal from the 2015 Iran Nuclear deal–a verbal agreement between former President Obama and the Iranian regime to end sanctions. President Trump recently rescinded the agreement, which Obama did not present to Congress for approval. The Trump administration is putting pressure on the regime in an effort to end their nuclear and ICBM programs which are developing missile technology that could reach Europe and North America

“This protest in Iran is significant,” said Dr. Mike Ansari, head of Mohabat TV. “It is the traders of Tehran’s Grand Bazaar that have taken to the streets protesting the rising prices and the plummeting value of Iran’s currency.”

Ansari, who runs a 24-hour Christian satellite network that beams gospel programs into Iran, said traders at the sprawling Grand Bazaar have historically played a significant role in the political affairs of the Islamic republic.

“Remember, it was this group of traders who were extremely influential in Iranian politics in 1979 when they economically backed the uprising, the revolution against the Shah, and brought Ayatollah Khoemeni to power,” Ansari noted.

Iranians chanting “Death to Israel” and “Death to America” are a common occurrence. Monday’s protests were different.

Video uploaded to YouTube showed thousands of angry protesters chanting, “Death to Palestine” and “Death to Syria,” an apparent reference to Iran’s military engagement in Syria and funding of the terror group Hamas in the Gaza Strip.

Rouhani told Iranians the government can withstand a new round of US sanctions following President Trump’s decision to withdraw from the nuclear deal.

“Even in the worst case, I promise that the basic needs of Iranians will be provided,” Rouhani claimed. “We have enough sugar, wheat, and cooking oil. We have enough foreign currency to inject into the market.”

Yet, hours after making that promise, thousands were back on the streets of Tehran for a second day as frustration grows over the country’s worsening economic woes.

“Can you imagine what would happen if the Iranian government, instead of wasting money in Syria, in Yemen and unnecessary wars in the Middle East, would start investing it in solving these problems in Iran?” Netanyahu asked. “The solution to all these problems is the Iranian people.”

Previous: Supreme Court rules Kansas woman can pray in her home
Next: Two men with total of 160 children sentenced for polygamy