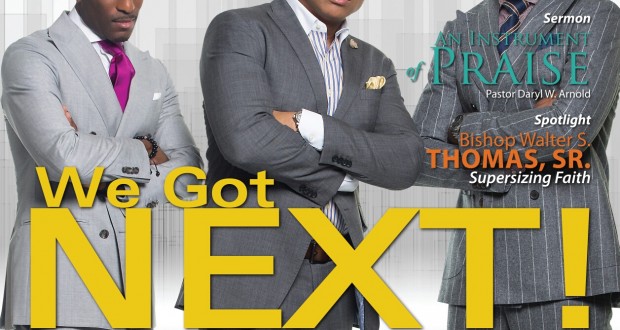 Mega Pastor Keion Henderson, of The LightHouse Church in Texas, has made the cover of Epitome Magazine’s Spring 2015 edition. Henderson is featured as part of the magazine’s â€˜Next’ segment, which spotlights the faith of new media’s mega-pastors.

Houston, TX |Christian News Service| — Pastor Keion Henderson, of The LightHouse Church, has landed the cover and feature story for Epitome Magazine’s Spring 2015 edition. Henderson is highlighted alongside Pastor Dharius Daniels and Pastor Andy Thompson for the magazine’s Next spotlight, which focuses on new media Mega Pastors. Pastor Henderson’s interview will be available when the magazine’s 2015 spring edition officially goes on sale.Â

“It was an honor to be asked to participate in the feature story.Â Â This is another way I can help spread the word of God to the masses and talk about how God has impacted my life. We live in a new media culture and myself, alongside the other Pastors, are figuring out new ways to help guide people towards a conversation and relationship with God using those tools and our own personal stories,” said Henderson.

Epitome Magazine’s Spring 2015 edition was announced just in time for Pastor Henderson’s Easter Expo 2015, which is put on by The LightHouse Church and various community sponsors. The free event, which happens on Saturday, April 4th, is yet another community-orientated endeavor that Pastor Keion hosts as a way to help bring families together with a spiritual presence.

“Easter is this Sunday. The Easter Expo is Saturday. Pastor Henderson is on the cover of Epitome, a magazine that acts as a platform to profile a variety of spirituality, family, health, and financial issues.Â http://epitomemagazine.org

Pastor Henderson graduated from IPFW in 2004. In college, God gave Pastor Henderson the inspiration to divert from sports to promote social empathy and religious growth as a profession. Pastor Henderson has since organized The Lighthouse Church, one of the fastest growing churches in Houston with 4,000+ members. Henderson is a popular speaker, preaching to audiences in the US, UK, Africa and around the world via appearances on internationally syndicated TV and radio shows. Henderson was nominated for a CNN Heroes Award and NAACP Image Awards Hometown Champions, a top 250 leader as recognized by the John Maxwell Leadership Institute and an honoree Community Hero at the 2nd Annual Top 50 Black Professionals and Entrepreneurs Awards.