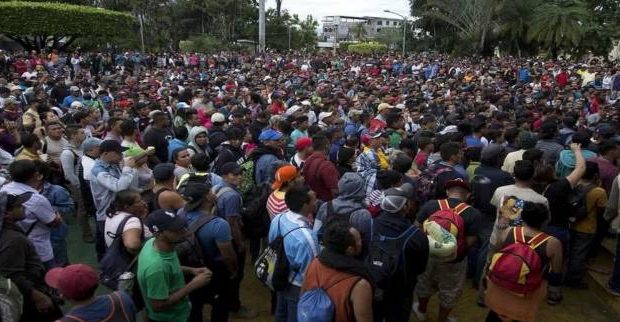 Migrant mass swells to 5,000, resumes march to US

Despite Mexican efforts to stop them at the border, a Central American migrant group has swelled to over 5,000 people as they advance toward the U.S. border.

The news came as Mexican authorities began seizing drugs and weapons from some of the young men in the group.

Their numbers grew overnight and at dawn Sunday they set out marching toward the Mexican town of Tapachula, 10 abreast in a line stretching approximately a mile.

The migrants had mobbed the Mexican border checkpoints, breaking down fencing and pushing their way past Mexican military personnel meant to block them.

It was not immediately clear where the additional marchers had materialized from since about 2,000 gathered on the Mexican side Saturday night. They seemed likely to be people who had been waiting on the bridge over the Suchiate River or in the Guatemalan town of Tecun Uman and who decided to cross under cover of night.

At dawn there were still an estimated 1,500 migrants on the Guatemalan side hoping to enter legally.

They marched on through Mexico like a rag tag army of the poor, shouting triumphantly slogans like “Si se pudo!” or “Yes, we could!” The chant mimicked President Obama’s campaign slogan from 2008 and 2012.

As they passed through Mexican villages on the outskirts of Ciudad Hidalgo, they drew applause, cheers and donations of food and clothing from Mexicans.

The migrants, who said they gave up trying to enter Mexico legally because the asylum application process was too slow, gathered Saturday at a park in the border city of Ciudad Hidalgo. They voted by a show of hands to continue north en masse, then marched to the bridge crossing the Suchiate River and urged those still on it to come join them.

The decision to re-form the migrant army capped a day in which Mexican authorities again refused mass entry to migrants on the bridge. Instead they are accepting small groups for asylum processing and giving out 45-day visitor permits to some. Authorities handed out numbers for people to be processed in a strategy seen before at U.S. border posts when dealing with large numbers of migrants.

But many became impatient and circumventing the border gate, crossing the river on rafts, by swimming or by wading in full view of the hundreds of Mexican police and army member manning the blockade on the bridge. Some paid locals the equivalent of $1.25 to ferry them across the muddy waters.

After saying that they would be returned, Mexican did not detain as they were reaching the Mexican bank.

President Trump and American border security experts say this will be a test of the sovereignty of US immigration and border processes. Trump has threatened to completely close down the American-Mexican border in an effort to stop the illegal entries into the country.

From October 2017 to the end of August 2018, 136,000 migrants walked across the border, joining hundreds of thousands who have arrived since roughly 2010.

The mass of migrants has been timed to reach the US border before the Nov. 6 mid-term elections.

The ACLU, immigration lawyers and other pro-migration groups say the migrant wave is driven by fear of crime more than by hope for jobs.

But the migration is mostly organized by labor-trafficking cartels, supported by U.S. and foreign pro-migration groups, and funded by U.S. employers who hire low-wage illegals instead of working-class Americans.

The cartels’ labor-trafficking business is providing them with billions of dollars in revenue, partly because the catch-and-release process allows migrants to get work in the United States and pay off their debts. But that huge movement of cheap labor — at least 400,000 work-permits in 2017 — is clipping wages for blue-collar Americans, including many Democratic voters.

But Congress has refused to help curb the economic migration. For example, in February, a tacit alliance of pro-migration Democrats and business-first Republicans in the Senate blocked Trump’s “Four Pillars” reforms. In August, business-first Republicans in the House — led by Kansas Rep. Kevin Yoder — pushed a bill that would dramatically expand the legal inflow of wage-cutting foreign workers.

Also, Senate Democrats — led by Sen. Tester — have rejected Trump’s request for funds to operate 52,000 detention beds and instead agreed to fund for only 40,520 detention beds. The House appropriations committee only approved funding for 44,000 beds, regardless of any intervention by Trump’s Hill liaison aides.

Tester and fellow Democrats and the GOP members on the Senate panel also blocked the hiring of additional agents to repatriate migrants who lose their asylum claims.

Senate Democrats, including Tester, McCaskill, Brown and Indian Sen. Joe Donnelly, are also pushing legislation that would tie the hand of border enforcement officers by barring the arrest and detention of migrants who bring children. Other Democrats want to give a free pass to migrants who say they are pregnant.

The clogged legal process means that few migrants are deported out of the U.S. job market, even though very few are approved for asylum.