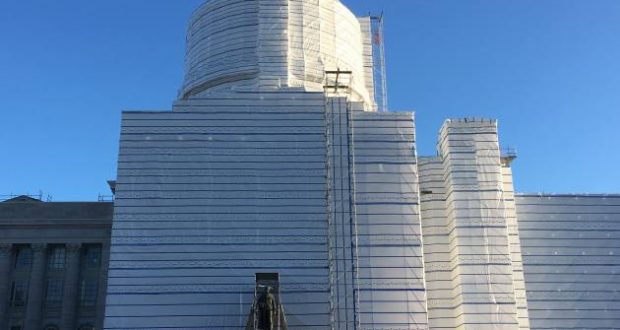 The Missouri State Capitol looks unrecognizable as it is shrouded in wind block and scaffolding as work begins.

The $50 million project to renovate the Missouri Capitol building in Jefferson City is on schedule to be completed in roughly two years.

The task includes a full restoration of the structure’s exterior that dates back more than a hundred years.

The project began with phase one in 2016 with the refurbishment of the outside Capitol grand staircase which is 30 feet wide and extends from ground level to the third floor. Extensive work was also done on the building’s foundation to stop water from leaking into the basement which had become a significant issue.

Phase two is much more visually apparent as much of the structure including the entire dome is encompassed with heavy gauge plastic sheeting that’s been put in place to ensure a climate controlled environment for masonry work being done.

The state Office of Administration, which is coordinating the project, awarded a $28 million dollar contract to Chicago-based Bulley and Andrews Masonry Restoration to address the deteriorating stonework on the Capitol’s exterior. Roughly 25 subcontractors are being employed and 50-75 workers have been hired for the project.

The task is being supervised by the Missouri State Capitol Commission which is charged with the preservation of the structure. Missouri House Chief Clerk Dana Rademan Miller chairs the Commission. She said the structure has been in urgent need of repair after declines in state revenue led to 15 years of deferred maintenance. “We were literally having pieces of the building fall off,” said Rademan Miller. “Things were braced on and bracketed and it just got to be a life safety issue where we were putting up a gate around certain areas of the building and not letting people go near it because we were afraid that a piece would fall. And that was unacceptable in my opinion.”

Funding for the project began with a bill to issue $40 million in bonds that passed the legislature in 2014. The first bonds were sold in 2015.  The sponsor of the measure was then Republican Senator Mike Parson of Bolivar who is now the state’s governor.  No taxpayer money is being used to finance the project.

The state capitol draws between 400,000 and 500,000 visitors each year according to the Office of Administration. Rademan Miller says the building, which was constructed in 1917, has unique architecture for its time. “Capitols that were built after 1915 and on into the 1920s kind of became more streamlined, more art-deco,” Rademan Miller said. “So ours is really unique because it was one of the last ones that was built with this, sort of, very classical style that is, in my opinion, is absolutely a tremendous work of architecture.”

The Missouri undertaking comes at a time when various other states have finished or are in the process of renovating their capitol buildings. Kansas completed a $325 million restoration of its statehouse in 2014. More recently, one of the most high-profile construction projects was the renovation of the Minnesota State Capitol which cost $310 million. Wyoming is also in the final stages of a $300 million rehab of its capital. Those projects have a much higher price tag than the one in Missouri because both the interior and exterior of the buildings are being restored.

Part of the outside work being done at the statehouse in Jefferson City is repair work at the structures north plaza where sidewalks and walkways have buckled, leading to a safety problem.

In addition, all the bronze monuments in the capital complex are being conserved. Chief among them is renovation work being done to the statue that had been perched 260 feet high on top of the capitol dome for 94-years. The sculpture of Ceres, the Roman goddess of agriculture, created a spectacle when it was recently lowered to the ground and shipped off to Chicago to undergo repairs.

Capitol Commission chairwoman Rademan Miller notes five-to-eight percent of the capitol building’s stonework is being replaced because of wear and tear from weather elements over the years. She says the building should be spotless when it’s finished. “The biggest thing I think you’ll see on the exterior is that the dome will be clean and the building will be sparkling,” said Rademan Miller. “Over the years when we knew this project was coming, we hadn’t done any cleaning.”

The Missouri Capitol renovation project is scheduled to be completed in December 2020.