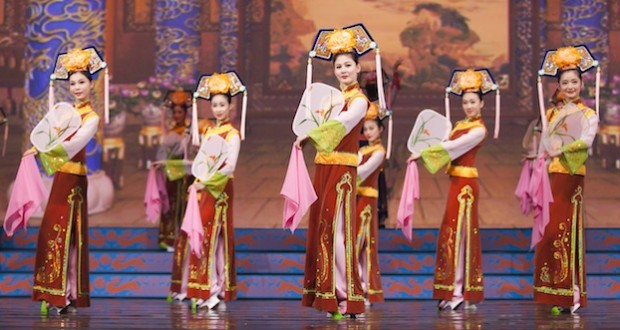 Shen Yun Performing Arts will bring 5,000 years of traditional Chinese culture to Kansas City and Lawrence in the next few weeks. The production returns to Kansas City Jan. 25-27 a the Kauffman Center and Feb. 12 at the Leid Center in Lawrence.

Classical Chinese dance is a complex system that goes back thousands of years. The discipline is a rigorous one both externally, with countless specific movements and difficult tumbling techniques, and internally, as the artists have to cultivate “yun,” which can translate into the bearing of the characters they don, or the inner feeling they need to express.

Its national touring company is amazing sell-out crowds across the nation, including those in Texas this week.

The duo was intrigued by the digital backdrop that the performers interacted with throughout the performance.

Mrs. Aerdtz said, “I think it’s fascinating how the music and the dancers go with the screen. It’s just phenomenal, it’s very beautiful.”

Mr. Aerdtz appreciated the extension of a faraway lands and dynasties into theater.

“I think it’s impressive, the way everything interacts,” he said. “The different scenes that are being set up, the way the technology interacts with the physical world…it’s really amazing.”

The two also said the stories featured throughout the performance were great.

Through classical Chinese dance, orchestral accompaniment, and solo musical performances, New York-based Shen Yun draws from a rich 5,000-year history to present its traditional Chinese culture and civilization on stage. The program tells stories, brings to life the rich and varied dynasties, and shows the many ethnicities from across China.

But the show doesn’t just celebrate culture, it is a reminder of that culture which has been virtually destroyed or suppressed by 70 years of Chinese Communist rule.

The Broadway show was formed in New York in 2006 by artists from around the world who wanted to revive the 5,000 years of Chinese civilization. It is a culture once almost lost, due to the decades of communist rule in modern China, where the regime has systemically sought to uproot the traditions and history through persecution and campaigns like the violent Cultural Revolution.

Mrs. Aerdtz said she felt the universality of the values of the traditional China she saw.

“I’ve been taught it’s all the same as Earth…and everything put together, and we’re all just one big happy family. And [Shen Yun] displayed that beautifully on the screen,” she said.

Juanita Pavlick, a Wichita County Judge was also in attendance.

She applauded Shen Yun’s work to protect and revive traditional Chinese culture and share its values with the world.

“This is something that I did not know, that there was this whole culture being destroyed,” she said.

“And then to think how wonderful it is for us to be able to share this. It would be a shame for it to be destroyed.”

‘More people should see it’

Pharmacy owners Michael and Donna Barsky were also at the performance.

“Be a good person. That’s the issue. And even through hard times, if you have faith, the good would win,” said Mr. Barsky.

Mrs. Barsky said that she appreciated that Shen Yun is preserving tradition.

“If we lose our tradition, we lose our history. So that’s what I like about this, she said. “And yes, more people should see it.”