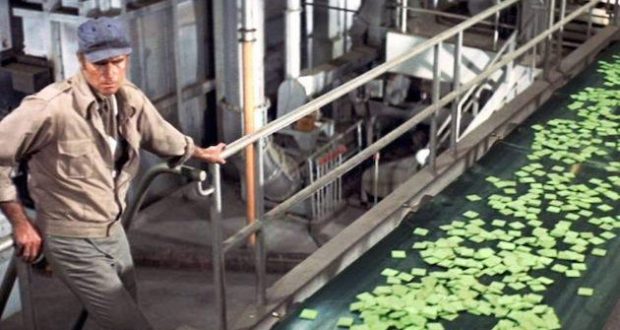 You now have to call meat for what it is…meat. At least in Missouri. A new law went into effect this week that makes it illegal for processed food manufacturers from wrongly labeling any food meat when it, uh, is something else.

The law, passed by the Republican-controlled legislature and signed into law by the Republican governor, says food that “is not derived from harvested production livestock or poultry,” may not be labeled as meat. The law lays out a $1,000 fine and up to one year in prison for companies and their CEOs who attempt use the word to describe food that is made from vegetable or chemical byproducts.

This comes as lab-engineered vegetarian “meat” increases in popularity. Companies like Impossible Foods and Beyond Meat use plant-based alternatives to create fake meat attempts to smell, taste and feel in your mouth like the real thing.

But it’s not. And legislators want consumers to be warned of the difference.

The US Cattlemen’s Association, representing over 10,000 ranchers across the United States, said the products could confuse consumers into buying vegetarian when they’re actually after real meat. The organization had earlier asked the federal government by way of a 15-page petition to officially define “beef” and “meat.”

“USCA has called on Congress and the Administration to engage on this pivotal issue and implement policies that will get out ahead of consumer confusion in the marketplace by enforcing truth in labeling and facilitating inter-agency dialogue,” said Kenny Graner, president at US Cattlemen’s Association. “We ask our members to encourage their representatives to find a labeling solution for cell-cultured protein that is both truthful and transparent. Meat is meat, it isn’t grown in a laboratory.”

The Missouri law requires all the lab “meat” factories remove “meat” from their product labels.

A lawsuit was filed this week in response by vegetarian food maker Tofurky. It aims to defend labeling its products as meat, as long as the packaging tells consumers what the ingredients really are even if in the tiniest print.

“I feel it’s vital to champion the rights of our entire industry and stand-up for our market position. Demand for plant-based proteins has sky-rocketed domestically and abroad,” said Jaime Athos, CEO of Tofurky, in an email statement. “Using our privately-held position to extinguish threats to legal definitions of terms like “meat,” is one way we can further our mission to help reduce global dependence on animal agriculture.”

Consumer groups applauded the move by Missouri as honesty in marketing.

No word yet on what the wannabe meat products will be called. In the 1973 classic movie Soylent Green with Charlton Heston, the green crackers really were meat-derived protein–they were just made from people.