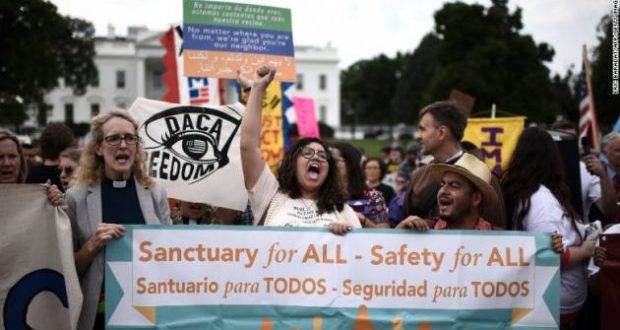 DACA supporters demand to be released from the political limbo created by Barack Obama yet blame President Trump for the mess.

The Supreme Court decided June 28 to review the constitutionality of President Barack Obama’s highly controversial Deferred Action for Childhood Arrivals (DACA) program. For seven years the executive order, which many scholars believe was unconstitutional in its scope, prevented current immigration laws from being implemented against hundreds of thousands of young illegal aliens from being deported.

The decision is a win for the Trump administration. But it means the DACA issue will remain alive throughout the 2020 election cycle. Protections for DACA recipients are expected to remain in place while the case is being considered.

Democrats are preparing to use the issue to win votes though political observers say while it helps with voters who favor open borders, the majority of Americans are against the policy because it ignores long established immigration laws that were agreed upon by both parties in the past.

“Certainly immigration and what we do as a country about immigration is going to be a key issue for the campaign,” Janet Napolitano, president of the University of California and former Obama Homeland Security secretary, told reporters on June 28.

Sen. Kamala Harris (D-Calif.), a presidential candidate, said during the Democrat Party candidates’ debate June 27 that if she becomes president, reinstating DACA by executive action will be the first thing she does in the Oval Office.

Republicans and Constitutional scholars have long said DACA is a brazen power grab, a usurpation of Congress’ constitutionally prescribed role in making laws. Before President Barack Obama created DACA in 2012 with the stroke of a pen, he actually acknowledged such a program would be unconstitutional.

“I am not king,” Obama said in 2010, adding the next year that with “respect to the notion that I can just suspend deportations through executive order, that’s just not the case.” But Obama did it anyway, unilaterally, by executive action.

There are about 700,000 or more DACA-eligible individuals who came as young people to the United States, but they are a small subset of perhaps about 4 million or so so-called “Dreamers,” many of whom failed to apply for relief under DACA, but could conceivably qualify under the kind of amnesty that Democrats and some Republicans are pushing for in Congress.

For example, in San Francisco, U.S. District Court Judge William Alsup, appointed by President Bill Clinton in 1999, found Jan. 9, 2018, that Sessions’ belief the program was unlawful seems to be “based on a flawed legal premise.” In other words, the judge ruled a president isn’t allowed to revoke an executive action taken by a previous president.

At the Supreme Court, the newly granted case arises from three cases that will be heard together during oral arguments. The cases are Department of Homeland Security v. Regents of University of California, Trump v. NAACP, and McAleenan v. Vidal. As is its habit, the court gave no reasons for its decision.

The Supreme Court’s decision to hear the case steals the spotlight from Texas-based U.S. District Judge Andrew Hanen, who is expected to rule soon in a lawsuit challenging DACA. In August last year, Hanen preliminarily found that DACA was probably unlawful, but refused to issue an injunction against it. In a separate case, Hanen previously blocked another Obama-era policy, Deferred Action for Parents of Americans (DAPA), before it began to operate.

“If the nation truly wants a DACA program,” the judge wrote at the time, “it is up to Congress to say so.”

Hanen said he wouldn’t pause DACA temporarily because Texas and the other states that filed suit against it dawdled when taking legal action.

“Here, the egg has been scrambled,” the judge wrote. “To try to put it back in the shell with only a preliminary injunction … and perhaps at great risk to many, does not make sense.”