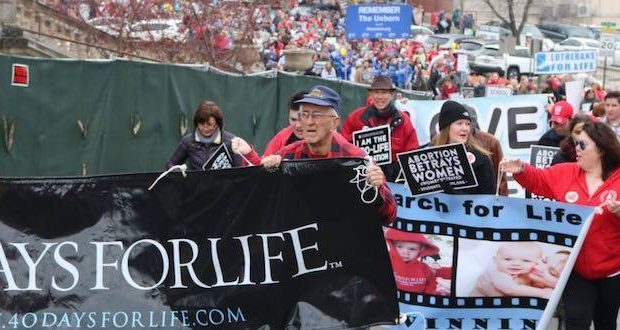 A rally in support of overturning Roe v Wade will be held Wednesday, Dec. 1 at the State Capitol in Jefferson City. The “Overturn Roe” event is one of hundreds planned across the nation as the Supreme Court hears arguments in Dobbs v. Jackson.

The case has gathered substantial attention from both life advocates and abortion backers because it is the most significant challenge to Roe v. Wade to rise up in the courts in more than a decade.

OverturnRoe.org, a coalition of pro-life groups, hopes the rallies will express their encouragement for upending the 1973 decision that legalized abortion in the United States. Individuals are encouraged to gather outside the Missouri Supreme Court Building, 207 W High Street, in Jefferson City to urge the repeal of abortion on demand in America. The rally runs from 12:30 pm to 1:30 pm. Interested parties can visit www.overturnRoe.org/rally for information or call Kathy Forck at 573-821-5130.

“The American people have long opposed Roe v. Wade. Even the late Justice Ruth Bader Ginsburg criticized the reasoning of the decision. We’re sending a message to the Supreme Court that it’s time for this bad ruling to be overturned once and for all,” said Kathy Forck, Team PLAY Servant Leader of the Jefferson City, Missouri Prayer and Rally Event.

“Roe v. Wade is outdated, it’s bad law, and it’s been responsible for the ‘legal’ murder of more than sixty-two million children,” explained Eric Scheidler, Executive Director of the Pro-Life Action League and a key coordinator with the OverturnRoe.org coalition.

“In fact,” explained Scheidler, “If the Supreme Court upholds the Mississippi law in full or in part, without overturning Roe v. Wade, they will have to replace the legal reasoning of Roe v. Wade and the later Planned Parenthood v. Casey rulings with another foundation for legal abortion. Will the conservative justices really be willing to do that?”

The organizers of OverturnRoe.org are hoping that the Supreme Court will instead overturn Roe v. Wade, returning this issue of abortion to the individual states. If that happens, Mississippi’s law would go into effect, and other states would be free to limit abortion more broadly or even ban it.

People advocating for the overturning of Roe v. Wade will gather outside of the United States Supreme Court, as well as other federal sites and government buildings across America. There are currently 85 separate rallies, prayer vigils, and highway overpass banner events taking place in 30 states, with new locations being added daily.

“December 1, 2021, could be the day that turns this country around. It could be the beginning of the path that draws Americans away from legalized, unrestricted, abortion-on-demand, at any time, for any reason,” added Scheidler. “It could be the day that the high court starts to put the power over America’s future back where it belongs: in the hands of the people. OverturnRoe.org is taking this historic moment to underscore that vital truth.”

A final ruling in the case is expected in Spring 2022.

OverturnRoe.org is a coalition of pro-life Americans devoted to restoring legal protection to unborn human beings. The coalition is led by three organizations: Citizens for a Pro-Life Society, Created Equal, and the Pro-Life Action League.

Previous: 2022 Grammy nominations include many popular Christian artists
Next: Magic Johnson grateful to God as he marks 30 years of being HIV-positive